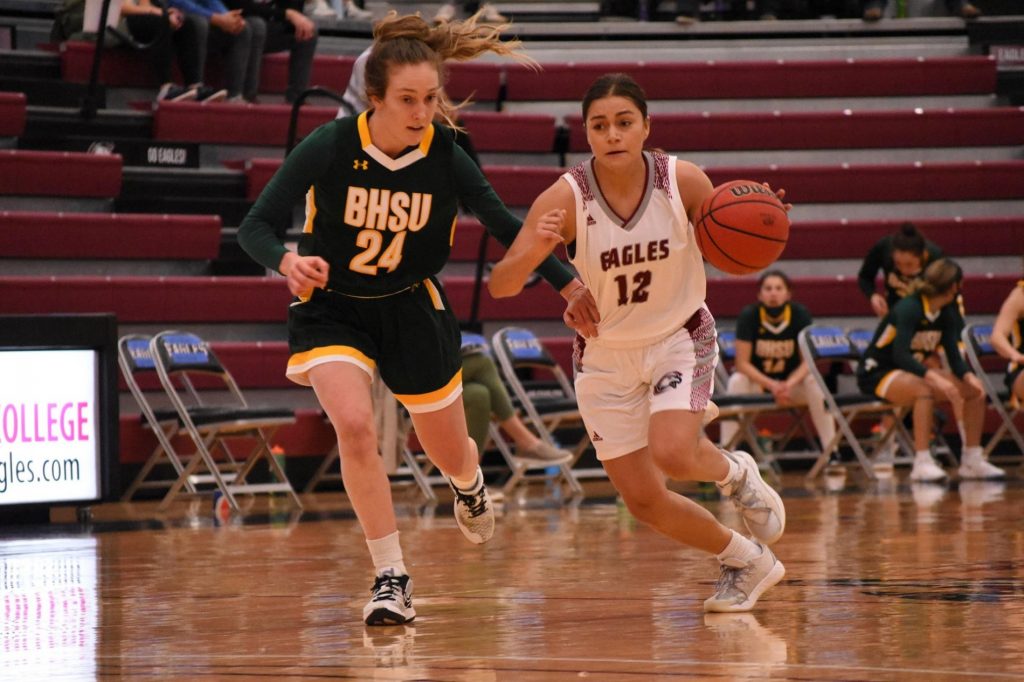 CHADRON, Neb. – January 26, 2020 — The Chadron State Eagles women’s basketball team opened its first home match with fans at the Chicoine Center with a 65-52 loss to the Black Hills State Yellow Jackets. While leading early in the game and trailing by only one point at the half, it would not be enough for the Eagles to secure their first win of the season.

CSC fell to 0-7 on the season, all in Rocky Mountain Athletic Conference play, while BHSU improved to 7-4.

The Eagles led in the first quarter 12-10 but the Yellow Jackets fought hard. By the end of the first half, the Eagles were trailing by one point, 22-23. Jori Peters led the Eagles in scoring with eight points, hitting 2-for-4 three-pointers followed closely by Rachel Henkle with six points and Ashayla Powers with five.

With only seven players dressing, the Eagles saw three players involved for the full 20 minutes of the first half in Olivia Waufle, Jori Peters, and Bailey Brooks.

In the third quarter the Yellow Jackets furthered their lead up to 44-33, with 21 points for the opponents and only 11 for the home team. Once the visitors gained the lead at 21-20, they maintained it for the duration of the contest.

The Eagles led in rebounds 7-6 and 11-6 and in offensive rebounds 3-0 and 5-2 in the third and fourth quarters respectively. They also acquired 15 second chance points.

Jori Peters led scoring for Chadron State with 16 points in the game and 3-for-5 for three-pointers, for a clip of 60%. Ashayla Powers would follow closely behind with 14 points and 5-for-9 field goals. Bailey Brooks was the only Eagle to play all 40 minutes of the matchup.

“We struggled with the press tonight,” said CSC Head Women’s Basketball Coach Janet Raymer. “We also came into the game with seven players, meaning we didn’t have a lot of subs. Considering everything, we gave a good effort, but Black Hills was better tonight.”

The Eagles are expected to return to home court this Saturday, January 30, hosting MSU Denver at 5:30 p.m.