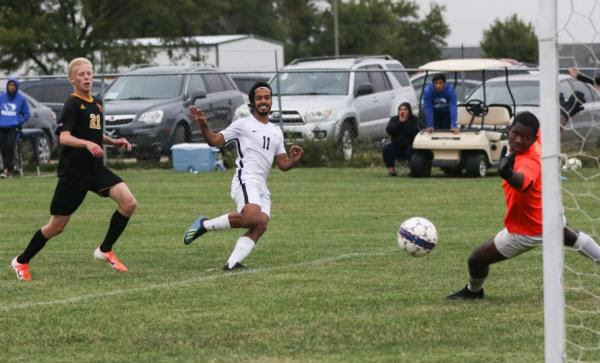 YORK – York College beat Ottawa University 2-1 on Saturday afternoon in a very physical matchup. The scoreboard and the stat sheets look like two different games as the Panthers outshot the Braves 23-3, but the Panthers were never in the clear as the Braves’ goalkeeper kept the game much closer than it really was.

Arturo Gutierrez III scored the first goal of the contest off of poor passing from the Ottawa backline to take the early lead in the 16th minute. The scored didn’t change until after intermission despite a 15-1 advantage in shots to the Panthers.

The Panthers got the game-winning goal when Matias Castano fed a through ball up to Gutierrez in the attacking third. Gutierrez then slid a pass past defenders on the left side to Jorge Alencar. Alencar took a dribble to set up his far-post shot to put York up 2-0. Ottawa’s Scott Cain made it a very interesting game as he took a bad pass from Jorge Keller and created the goal-scoring opportunity. He was pulled down from behind by Keller and awarded a penalty kick, while also seeing Keller sent off with a red card.

The Panthers played down a man the final 25 minutes in a very physical game. There were 23 fouls called and seven cards issued between the two teams. Gabriel Cabral picked up the win for York as he faced only one shot on goal.

York improves to 5-2 on the season. They will host Avila University at 3:30 pm on Wednesday afternoon at the Cornerstone Sports Complex.