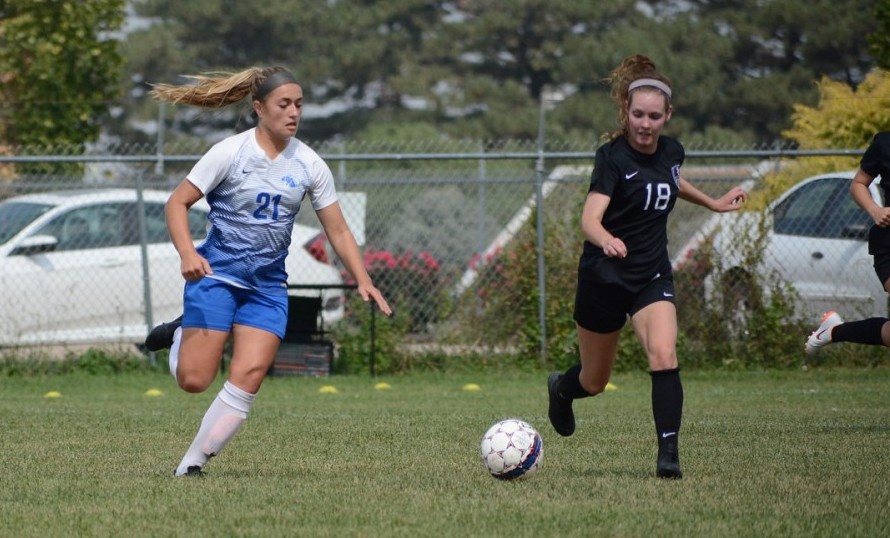 YORK – York College defeated Southwestern 2-1 in their conference opener Tuesday afternoon. The Panthers controlled the game despite a close 2-1 score.

Amber Jimenez (SO/Gilbert, Ariz) gained control of the ball just ahead of midfield after a punt by the Southwestern goalkeeper couldn’t be collected by her own team. Jimenez took a few dribbles and then provided a nice through ball to Breanna Bembenek (SO/New Lenox, Ill) at the top of the penalty area. Bembenek ripped a low shot back against the goalkeeper’s momentum for the 1-0 lead.

Despite the 11-1 shot ratio in the first half the Panthers were only able to notch the one goal before the intermission. In the second half the Panthers continued to dominate possession and got an insurance goal from Carmen Zavala (SO/Chino, Calif). Justine Medina (JR/Fontana, Calif) sent a corner kick into the box in the 64th minute that found Jimenez. Her header was saved on the line by a Southwestern defender who headed it away. Medina was able to send another ball across the goal that found Zavala leaning backwards as she headed it to just over the stretched arms of the goalkeeper for the 2-0 lead.

Southwestern was able to make a game of it however, thanks to a misplay by the Panthers defense. A slow bouncing ball came into the goal box that didn’t seem to be dangerous, but Madison Kinney(SR/Council Bluffs, Iowa) wasn’t able to get the front of her head on the ball, as it hit the top of her head ,and bounced over Cassandra Martinez (JR/Madera, Calif) for the own goal.

York out shot the Builders 21-2, led by Bembenek’s six shots.

York travels to (25) Ottawa University on Saturday for another KCAC matchup. York is 6-1 on the season and 1-0 in conference.