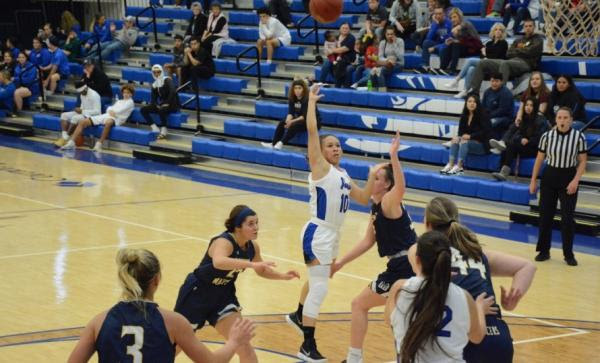 YORK – York College fell to the visiting Avila University Eagles in their KCAC opener Wednesday night 89-71. The Panthers held strong in the first half, but a decisive third quarter had the Eagles pull away. The Eagles outscored the Panthers 30-14 in the quarter.

York trailed 22-11 after the first quarter but a 25-19 second had the Panthers within five at the break. Both teams shot the ball well, shooting over 40% from the field. The biggest difference was the free throw line. The Eagles were able to force the Panthers to put them on the line as they were 26-for-35 from the charity stripe. The Panthers were only 13-for-23. That 13-point difference made an impact in the 18-point loss. York also was outrebounded in the game 42-26.

Amaia Diez (SO/Pamplona, Spain) led the Panthers in scoring with 16 points. Susie Traver (SR/Portland, Ore.) was the only other York player to score in double figures as she finished with 10. The Eagles had their scoring spread out with four players in double figures.

The Panthers fall to 1-4 on the season. They will travel to Kansas on Saturday to play Bethany College at 5:00 p.m.