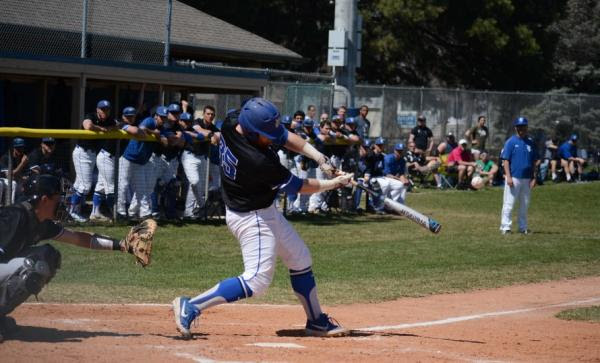 Shreveport, LA. – York College pulled off two upsets as the 5-seeded Panthers beat Columbia College in the first game of the NAIA Opening Round, and then in the third game of the bracket knocked off top-seeded Oklahoma City University.

In the first game of the bracket York was matched up against the four seed Columbia College Cougars. The Panthers jumped on the board quickly scoring two runs in the top of the first inning. DB Vidal (SR/Livermore, Calif.) and Lawyer Braun (SR/Federal Way, Wash.) hit back-to-back singles. Matt Nunes (JR/Fowler, Calif.) followed suit when he hit an RBI single to take the lead. Ethan Lanz (SO/Littleton, Colo.) knocked in Braun on a single to shallow right.

Lawyer Braun added an insurance run in the third with a solo shot to left that put the Panthers up 3-0.

The Cougars made it a ball game in the fifth when Nolan Rattai hit a two-out double followed by an Ethan Howser home run. With a 3-2 lead, the Panthers answered in the top of the sixth scoring three runs. A lead-off single by Luke Jackson(SR/Escondido, Calif.) got things started. A walk to Travis Tuner, followed by an error that put on Casey Wagnon (SR/Fresno, Calif.), a bases-loaded walk to Freddy Tlatenchi (FR/Omaha, Neb.) scored Jackson. DB Vidal and Matt Nunes each hit a sacrifice fly to score a run.

York looked to be in command of the game up 6-2, however a 4-run seventh tied the game after Evan Sagariballa (JR/Kerman, Calif.) got into some trouble. Sagariballa pitched a stellar game but allowed two walks and two hits to lead off the inning. Spencer Jones (SR/Three Rivers, Calif.) came in for relief but couldn’t record an out as he faced five batters. He hit one guy, walked three, and gave up one single. Garrett Ewing (JR/Liberty, Mo.) came in to replace Jones and on his second pitch got the Cougars to ground into a 5-2-3 double play.

With a tie ball game, Jake Sola (JR/Lincoln, Calif.) came in clutch in the top of the ninth inning. With a 2-0 count, he sent a fastball over the left field fence to put the Panthers up for good and send them to the night-game against top-seeded Oklahoma City.

York was blanked in the third but was moving again in the fourth and fifth inning as they picked up two runs and three hits in each. Another three hits came in the sixth inning for York and one run came across the plate as Matt Nunes hit in Casey Wagnon.

The bottom of the sixth inning the momentum started to change as Matt Lindsley(SR/Bakersfield, Calif.) walked the first two batters. After a flyout, he hit a batter to load the bases. Another walk scored a run and then Jake Sola had an errant throw that scored two runs with no outs recorded on the play. A couple more hits off of Lindsley and his night is done. Spencer Jones came in to record the final out of the sixth inning, but the six runs make it an 11-7 ball game.

York scored in the eighth to make it 12-7 and Jones was able to keep goose eggs on the scoreboard the final three innings. Jones picked up his 10th save of the season and Lindsley picked up his 12th win on the year. York pounded out 20 hits on the night led by the top-three in the lineup. DB Vidal, Lawyer Braun, and Matt Nuneswere a combined 12-16. Jake Sola and Ethan Lanz each added three hits as well.

York moves on in the winner’s bracket and will face Bellevue University at 3:30 p.m. on Tuesday.