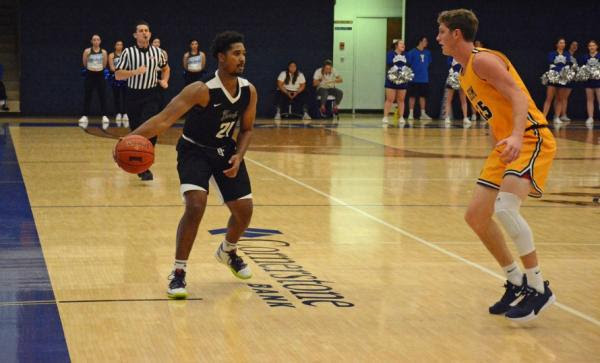 YORK – York trailed by as many as 14 points in the first half, but were able to rally in the second to beat the visiting University of Saint Mary 72-60 on Wednesday night.

After shooting just 30% from the floor in the first half, York’s offense picked up in the second and the team shot 48% from the floor. Lance Ewell (SR/Brock, Texas) gave the Panthers their first lead of the game with 8:47 remaining in the game. Following that basket, Eric Lenear (JR/Bellevue, Neb.) made four free throws that would end a 13-0 run for the Panthers. After that, the Spires were able to get within one possession just one time with over five minutes left in the game. The rest of the contest was owned by Victor Lewis (SR/Moreno Valley, Calif.) and the Panthers. Lewis scored 11 points in a row for the Panthers and 12 of the final 19 points for his team.

After the slow start in the first half the Panthers felt good when they went into intermission only down by nine at 38-29. York was being outplayed on both ends of the court and couldn’t score offensively. On defense, the Panthers were having trouble stopping the back cut that was allowing the Spires to shoot over 46% from the field.

York’s second half was much different as their pressure forced turnovers and the Spires to play quicker than they wanted. USM turned over the ball 23 times and the Panthers turned that into 30 points.

Eric Lenear had a game-high 21 points as the only other Panther in double figures.