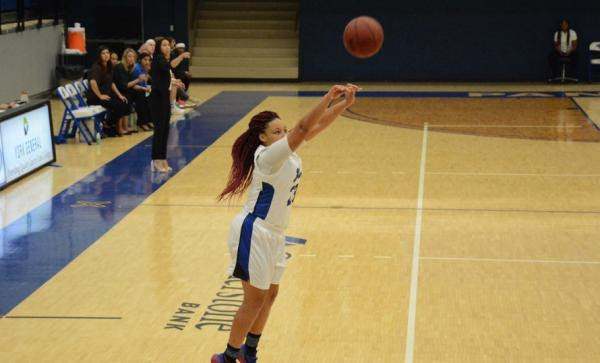 YORK – The Panthers used a big third quarter to fight back from a 10-point deficit to tie the game with just over a minute left in the quarter. Unfortunately, the Panthers couldn’t get any closer than tying the game, two times, before falling 58-52.

York’s difficulty to sustain the upset bid in the fourth quarter was due to three Panthers fouling out. Amaia Diez (SO/Pamplona, Spain) and Kendall Fike (SR/Ada, Okla.) both fouled out midway through the final frame. Kiara Pesina (SO/San Antonio, Texas) fouled out as well. Both Fike and Diez were limited throughout the game due to foul trouble and each played less than 24 minutes.

TaShay Jackson (SR/New Rochelle, N.Y.) was the force for the Panthers’ comeback as she sparked the run with her driving capabilities. However, she was also plagued with foul trouble and sat over half of the fourth quarter. She finished with a team-high 12 points. Diez was the only other Panther to score in double figures as she finished with 11. Sarah Shelbourn (JR/Mission, S.D.) chipped in eight points off of the bench.

York’s defense was what kept them in the game as they forced 29 turnovers. But the fouls were too much to overcome as Bethel converted 31-of-40 from the line. York attempted just 17 and converted on 11.

The Threshers also outrebounded the Panthers 51-27.

York travels to Avila on Wednesday for another KCAC matchup.