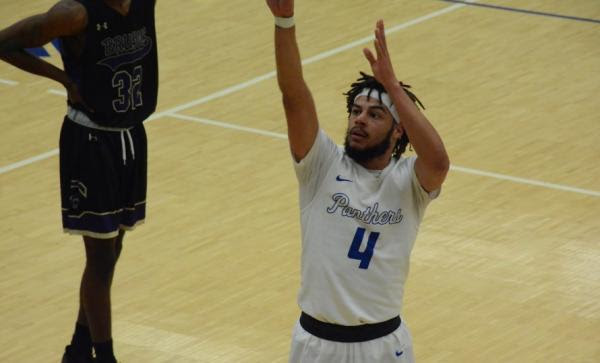 Yankton, S.D. – York traveled up to Yankton, South Dakota on Tuesday night for a nonconference matchup against the Mount Marty Lancers. The Panthers, coming off of their first loss of the season against Bellevue, played solid all night as they led for all of two and a half minutes in the 80-70 win.

Michael Tolbert (SR/Apopka, Fla.) and Tyreece Berry (JR/Muskogee, Okla.) led the Panthers with 17 points apiece. Eric Lenear (JR/Bellevue, Neb.) added 15 points, while Lance Ewell (SR/Brock, Texas) had 11. After the Panthers struggled on the boards against Bellevue York did a much better job as they finished with a 43-35 advantage.

York jumped out of the gates right away building their lead up to seven just four minutes into the game. York held strong for eight more minutes before the Lancers went on a little run and got back into the game. The Lancers took their first lead of the game with 7:38 remaining in the half going up 32-31. York rebounded back in it and jumped their lead back up to four before a 5-0 run put the home team up by a point once again 41-40. That was the final lead for Mount Marty as the Panthers finished the half on a 7-2 run to lead 47-43 at the break.

In the second half it was all York as the Panthers quickly jumped out to a nine-point lead. The game was very much back-and-forth from then on as the Lancers never got closer than two possessions, but the Panthers never built a double-digit lead until under five minutes to go in the game.

York’s big advantage came via points off of turnovers. York held a 25-9 advantage in the category. York also shot 56% from beyond the arc on 9-of-16.

The Panthers play an exhibition this weekend against NCAA II Oklahoma Christian University. After that road trip York travels to Fremont to take on Midland University.