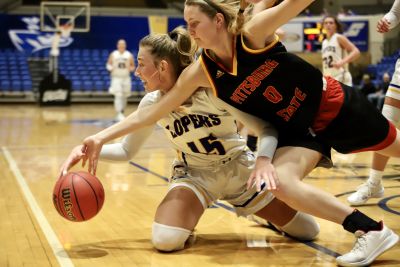 Pitt trailed 5-0 and 9-4 but had things tied at 12 by the end of the first quarter and then erupted for 27 points in the second to take a lead they never relinquished. The Gorillas made 11 of 16 second quarter shots including three triples. UNK did shoot 40 percent (6 of 15) in that 10-minute span but misfired on all three long range shots.

The Lopers, having four score in double figures, hung around in the second half and got the deficit down to eight and nine points on several occasions. However Pitt always had a response, usually a DaMintz drive to the bucket or a big play by Alvarado who also had a double double last year vs. the Lopers. The 88 points scored by Pitt is a season-high for a UNK opponent. ​

“Our issue was defense. They are really good on offense and can score a lot of points. They were able to use the ball screen to be able to get downhill and get what they wanted,” UNK head coach Carrie Eighmey said. “Our ball screen coverage was probably the issue today. In a lot of other categories we were ahead but we just didn’t do a good job of containing the ball.”

“We knew they were going to be a tough team to slow down. They made a lot of plays and I thought their posts finished about everything around the rim. And their point guard (DaMintz) created plenty of offensive opportunities,” Eighmey said.

Grabbing 13 offensive rebounds and forcing 15 Pitt turnovers, UNK was led by Colorado point guard Haley Simental. The grad transfer went 24 points, two shy of her career-high, thanks to eight made buckets (three treys) and five free throws. She also drew five fouls and had three dimes in a team-best 32 minutes.

“Offensively I thought we struggled in the first half. They did a good job of limiting the movement of our post players and us being able to get it in there freely. In the second half we were better at that end,” Eighmey said. “When you score 74 points that’s not a terrible offensive day.”