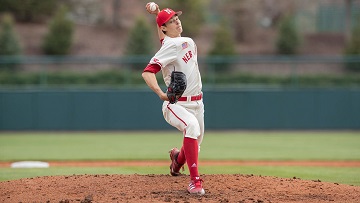 Following a career-high 7.0 shutout innings and 10 strikeouts in Nebraska’s 6-1 series-opening win over Minnesota last Friday, Cade Povich was named Big Ten Pitcher of the Week on Tuesday afternoon. It’s the first time Povich has earned player-of-the-week honors from the league and he is the first Husker pitcher to be tabbed for the award since Nate Fisher on March 11, 2019.

Povich’s 7.0 innings of work on Friday topped his previous best of 6.2 innings against Columbia last season. The junior left hander has now recorded double-digit strikeouts in two of his last three starts, including a career-high 12 against Ohio State on March 12. Povich put the Gophers down in order three times and allowed just four hits and no walks.

In four starts this season Povich has totaled team highs with 22.0 innings pitched and 32 strikeouts. The Bellevue, Neb., native has just six walks in 2021, with four of the walks coming in the season opener against Purdue.

The Huskers have earned a player-of-the-week award for two-straight weeks, as Cam Chick was named Big Ten Player of the Week last Wednesday.