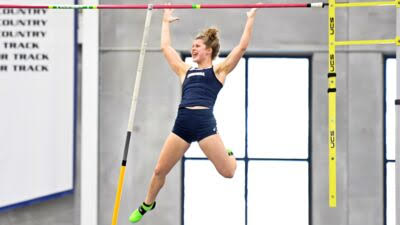 SEWARD, Neb. – Sophomore Josie Puelz keeps on flying high in the pole vault while headlining a Concordia University Women’s Track & Field team ranked second in the NAIA (according to the U.S. Track & Field and Cross Country Coaches Association). Puelz rose above a school record as one of 10 Bulldog event championship performances at Friday (Feb. 5)’s Concordia University Classic that took place inside the Fieldhouse. Doane and Hastings joined Concordia at the meet.

Both of Head Coach Matt Beisel’s squads rank amongst the top five of the NAIA this 2021 indoor season. It’s just about that time of year when the Bulldogs hope to hit their peak.

“There were a lot of good things,” Beisel said. “Very few meets do you get everything you want, but across the events I saw good things happen. The highlight of the day was Josie Puelz breaking Allie Brooks’ school record. I’m very happy for Josie. She has put in so much work with Coach (Jason) Berry.

“I’m always proud of these kids and I love these coaches. I’m thankful to God that he’s given me this privilege to bring people together from all over the United States. Iron sharpens iron and I see it every day. We’ll see what happens next week before conference.”

Considering Puelz had cleared 13 feet last week, it seemed to be only a matter of time before she blew past former teammate Allie Brooks’ school record of 13’ 4 ¼.” Puelz became the new record holder on Friday when she lifted herself over 13’ 4 ½” while dominating the field of competitors. The Lincoln Lutheran High School alum is the NAIA leader in a close national battle with Victoria Faber of Aquinas College (Mich.).

“It’s a little bit surreal. I don’t think it’s quite sunk in yet,” Puelz said of setting the new standard. “Jumping over 13 feet last week is still pretty crazy for me. My goal today was to be consistent. I really don’t have any words right now. You dream about this day for so long and it’s here and then it’s like, what’s next? All glory to God for sure.”

Also in the pole vault, Anna Baack (11’ 5”) again cleared 11 feet. On the men’s side, Chase Berry led the way by vaulting 15’ 1 ½.” Concordia currently boasts the NAIA’s top-rated pole vault crews for both men and women.

On the men’s side of the throws, sophomore Chris Wren is improving with every rep. He propped up an already existing top 10 national mark in the weight throw by landing a throw of 58’ 8 ¾,” putting him in fourth place out of a loaded field. Meanwhile, Andy Amos (47’ 2 ¼”) continues to pace the team in the shot put.

Said Wren, “I’m just focusing on what we’re doing in practice and getting some good stretches in the weight. It feels right. You can feel it slide right off the hand and it travels. It’s a good feeling. I’m hoping to get a little closer to 18 feet at these next couple meets and see what we can do at nationals.”

There are also plenty of good things happening on the track. Rachel Battershell and Sarah Lewis are a dynamic duo as 400 meter runners and hurdlers. Lewis (8.88) and Battershell (8.95) both came in under nine seconds in the 60 meter hurdles (placing second and third). They later teamed up with Keri Bauer and Lainey Werts on a season best 4×400 meter relay time of 3:57.48 (top five in the NAIA). In addition, Lewis ran a 58.76 open 400 (second place).

A two-time GPAC Track Athlete of the Week this season, sophomore Kylahn Heritage blazed to a personal best of 5:10.61 in the mile and won the event. That may be good enough to put her in the top 10 of the nation when the dust settles this weekend. Other women’s winners on the track included Bauer (600 meters), Sydney Clark (5,000 meters) and Rylee Haecker (1,000 meters). Bauer became the third Bulldog this season to run the 600 in under 1:40. When converted to the national performance list, Haecker’s 1,000 meter time converted to less than three minutes (2:59.65).

The Concordia men earned first-place finishes on the track courtesy of Jacob Jennings (400 meters), Camden Sesna (1,000 meters) and Christian Van Cleave (600 meters). In the very last action of the night, Jennings and Van Cleave joined a 4×4 group that included Cade Kleckner and Henry Reimer. They finished in 3:23.44, a hair behind first-place Doane. Beisel was also pleased with the mile performances of Calvin Rohde (4:25.90) and Sesna (4:27.69), in particular.

Most notably in the jumps, freshman Amy Richert won the women’s high jump by clearing 5’ 5” (No. 4 on the school’s all-time list). In the long jump, Katie Severt landed at 17’ 7” (fourth place). NAIA national heptathlon leader Cody Williams competed in the triple jump, pole vault and 60 meter dash while continuing to gear up for the conference meet.

The Bulldogs will host their final home meet of the indoor season next Saturday (Feb. 13) when the Concordia University Invite will unfold inside the Fieldhouse. The Concordia Invite will lead into the GPAC Championships (Feb. 19-20), which will be hosted by Dordt.