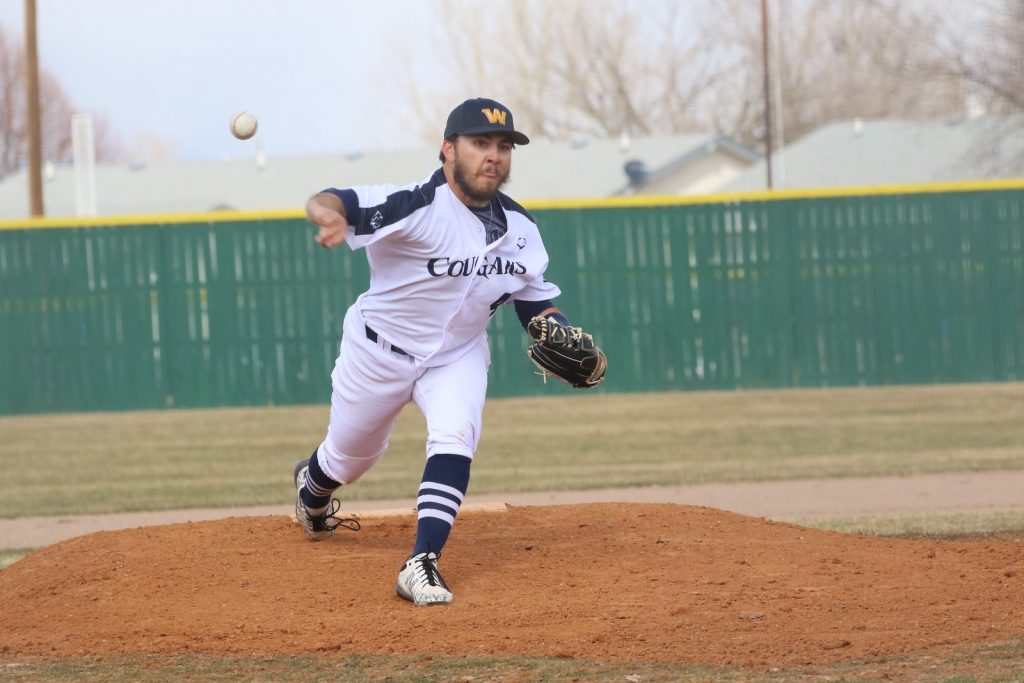 The first game saw WNCC score five six-inning runs to come back from a 7-5 deficit to earn the 10-8 win. WNCC had two big home runs in the contest from the bats of Jordan Rollins and Joey Olson.

The second contest saw Richter strike out four and walk three in recording a no-hitter in the 11-1 win over the Trojans.

Richter’s no-hitter was the first no-hitter thrown by a Cougar pitcher since Scott Fogelson tossed a no-hitter against McCook Community College in March 2002. The Cougar pitching staff had plenty of one and two-hitters, but no-hitters have come at a premium.

Richter said it was nice to get the no-hitter, but it wasn’t the prettiest no-hitter.

“Probably one of the worst no-hitters with all the walks and stuff, but we got it done,” Richter said. “It was just a lot of fastballs inside because of the wind today. After the first inning, I came back in, sat down a little bit, thought about some stuff and went back out and felt really good after that.”

Better yet than the no-hitter, was the Cougars picked up two wins after suffering a 14-2 loss to Northeastern Junior College on Wednesday. Richter said the team played well to record the sweep over the Trojans.

“We played really well today, I think,” Richter said. “The hitting showed up. Pitching was pretty good today. Harold [Baez] came in big and Jerson [Morales] started off pretty good. And Joey [Olson] game through with the big home run in the first game. Then we started taking on runs each inning in this last game.”

The second game saw the Cougars score in four of the five innings as they earned the 11-1 run that was called in the fifth inning because of the 10-run rule.

Trinidad scored first with a single run in the first on no hits with one error and a couple free passes. Trinidad’s lead-off batter Saavedra reached on an error and came in to score on a fielders choice hit for the 1-0 lead.

After that, Richter shut down the Trojan offense and the Cougar offense manufactured runs with two runs each in the first, second, and third inning.

Caleb Coats walked to start the first and then scored on a Jordan Rollins 2-out single. Matt Womack made it 2-0 after a run-scoring double to make it 2-1.

For the second straight inning, Richter got the Trinidad batters to go down 1-2-3. That set up the third inning for the Cougars. Rollins singled to lead off the third followed by Womack getting a walk. After a double play put two out, Tarango and Jones earned back-to-back walks to while Rollins scored the fifth run of the game on a wild pitch. Tarango would make it 6-1 on a Quinn McCafferty single.

WNCC didn’t score in the fourth, but plated five runs in the fifth to end the game. The fifth all started as Womack and Dillon Fabricus earned walks. Tarango then reached on an error to load the bases. Womack scored on a wild pitch to make it 7-1 and then Jones singled in Fabricus to make it 8-1. Tarango scored on a McCafferty single.

Alcantara then walked to put two one with two outs. Joey Olson scored McCafferty with a single to make it 10-1. Rollins was then plunked by a pitch to load the bases. Moments later, Alcantara scored on a passed ball to end the game.

WNCC finished with 10 hits in the game. Rollins, Jones, and McCafferty all had two hits in the game. Tarango and Womack had the only extra base hits as each had a double. Tarango scored three runs while Rollins scored twice. Tarango came in to score on a passed ball and Jones scored on a Luis Alcantara single to make it 4-1.

The second game saw WNCC start off well, scoring three times in the first and once in the second for the 4-0 lead.

WNCC’s offense on the day started as Coats reached base on an error and then Alcantara was hit by a pitch. After two outs, Rollins delivers a 3-run home run to rightfield that everyone knew was out of the park as soon as it was it for a 3-0 lead.

WNCC added one in the second as Felton singles and scored on a Coats grounder for the 4-0 lead.

Trinidad came back in scoring seven unanswered runs to take a 7-4 lead in the fifth. WNCC countered with one run in the fifth on a Olson solo home run to make it 7-5.

The Cougars changed the momentum of the game in the sixth when they scored five times. Womack led off with a walk and then scored on a Felton double. Riley Schanaman and Joe Kinneberg each walked to load the bases with no outs. Felton scored on a wild pitch with a head-first slide into home to tie the game at 7-7.

Next batter, Schanaman scores the go-ahead run with a head-first slide into home as the former Gering graduate scored on a passed ball. Kinneberg came in to score to make it 9-7 on a Alcantara double and Alcantara scored on an Olson double to make it 10-7.

Harold Baez picked up the win in relief of Jerson Morales. Morales went four innings to start the game in giving up six runs on four hits while striking out five. Baez went three innings in allowing four hits and two runs. Baez struck out four and walked just two to get the win.

WNCC and Trinidad will be back in action for a doubleheader on Sunday beginning at 12 noon at Cleveland Field.