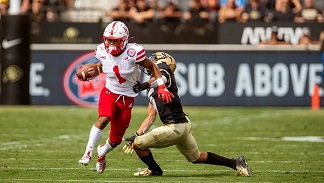 Wan’Dale Robinson was named a second-team freshman All-American by The Athletic on Thursday, making the team as a wide receiver while playing both wideout and running back for Nebraska in 2019.

Nebraska’s first letterwinner from Kentucky, Robinson was one of the nation’s most productive freshmen this fall despite battling injuries that forced him to miss multiple games. He caught 40 passes for 443 yards and two touchdowns while also rushing 88 times for 340 yards and three scores. Robinson had the most receptions and receiving yards of any true freshman in Nebraska history, and he was also the Huskers’ leading kickoff returner.

Robinson’s average of 102.9 all-purpose yards per game ranked fourth nationally among all freshmen in 2019, including second among true freshmen and second among all Power Five freshmen. Robinson was also one of the nation’s most versatile players, and fittingly he was one of four national finalists for the Paul Hornung Award, which is presented annually to the nation’s most versatile player. At the conclusion of the regular season, Robinson was one of only two FBS players to total 400 receiving yards, 300 rushing yards and 200 kickoff return yards, and he was one of three players to have both 70 rushing yards and 70 receiving yards in the same game multiple times during the 2019 season.

In addition to being a freshman All-American and Hornung Award finalist, Robinson was also an honorable-mention All-Big Ten selection – despite missing one-third of the conference season – and he was a two-time Big Ten Freshman of the Week in 2019.