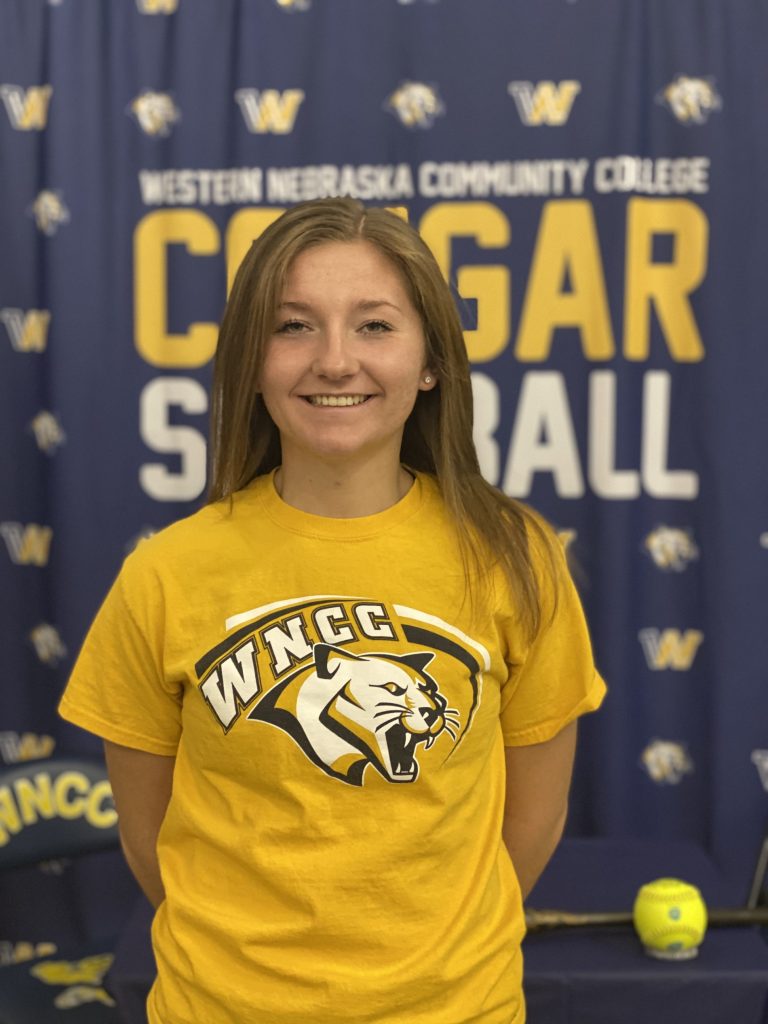 Johnston, who has played varsity for Scottsbluff since her freshman year, signed over the weekend to continue playing at Western Nebraska Community College under head coach Katie Groves.

“I picked WNCC because it felt like home,” Johnston said. “Coach Groves really did make me feel like I belonged there, and she was so welcoming. It’s just an added bonus that I get to play in my hometown.”

The biggest thing, after four strong seasons with the Bearcat softball program, Johnston gets to continue her softball playing.

“It means the world to me to be able to continue my softball career at WNCC,” she said. “Ever since I was little, I have always dreamed of playing at the collegiate level and now that it is actually happening. It’s just a dream come true.”

That dream will continue next year with a Cougar program that has won plenty of Region IX titles in the last 12 years.

“My goals for WNCC are to grow as an individual, a student, and an athlete,” Johnston said. “I want to push myself to be the best I can be, and I feel as if this is the perfect place to do it.”

Johnston finished the year with one of her best seasons, finishing with a .324 batting average with two home runs, a triple, and five doubles. She also had 22 RBIs and 26 runs scored.

Her junior year, Johnston had a .296 average with three home runs and five doubles.

She finished her career with four home runs, 18 doubles, 54 RBIs, and 79 runs scored.

“My softball career at Scottsbluff has given me so many opportunities,” she said. “I’ve had the chance to meet so many new people and play under so many amazing coaches. It really gave me the chance to grow as an athlete as well as a person.”

Johnston said the biggest thing she remembers about this past season is playing in that district final.

“It was such an amazing experience to play in the district final this year,” she said. “The girls and I have busted our butts for the past four years so to see it finally pay off was just amazing and an experience I will never forget.”

“I can’t wait to see what the future holds,” the nursing major said. “I can’t thank everyone enough for the unconditional support throughout my whole softball career.”

Groves also inked two other softball players over the weekend. Also signing this weekend were Macyn Hartman, a utility player from Booneville High School in Washington Terrace, Utah, along with Katie McMillan, a pitcher from Abbotsford, British Columbia. McMillan is the sister of former Cougar pitcher Emma McMillan.