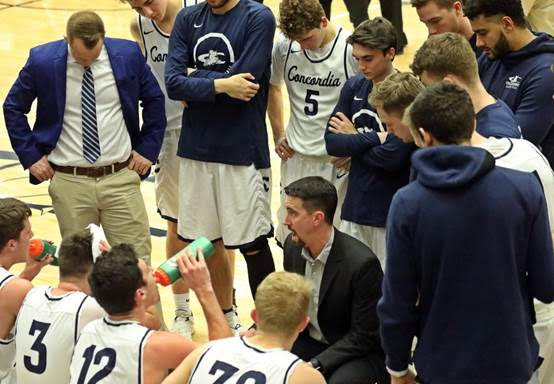 Outlook
The Concordia men’s basketball program entered the 2018-19 season with plenty of growth required before it could compete with the GPAC’s top teams (hence the team’s theme, “Grow Dawgs”). A year later, the dynamics have changed considerably. The Bulldogs went from a squad with little experience or continuity to one with nearly all key varsity performers back in place. Head coach Ben Limback returns each of his five starters while getting set for his seventh year at the helm of the program.

The wealth of returners won’t guarantee success, but it’s obvious that Concordia is in a better position than it was this time a year ago. October is certainly a time for optimism any men’s basketball program.

“It’s been great. We’re two weeks in now,” Limback said. “Just having returning guys that know the structure of practice and having familiarity is huge. We had a large group that stuck around this summer that I was really proud of as far as their effort and dedication. That’s been a huge difference and we see it right now. We have great depth in practice and it’s very competitive.”

Halfway through the conference slate last season, the Bulldogs sat at 1-9 in league play. At that point, a berth in the GPAC tournament seemed to be a longshot. Steered by playmaking point guard Brevin Sloup, the Bulldogs won six of their last 10 GPAC regular-season games and placed eighth in the conference standings. That’s not where anyone inside the program aspires to be, but it was a start.

Sloup, also known as “The Mayor,” teams up with 2018-19 GPAC Freshman of the Year Carter Kent and senior Tanner Shuck to form a trio that can light it up from the perimeter. They showed what is possible when they operate at their best like they did on Jan. 12 when they combined for 73 points and Concordia upset then seventh-ranked Briar Cliff. The task now is figuring out how to replicate those efforts on a more routine basis.

The Seward High School product Sloup took off as a junior, seeing his scoring average spike from 4.5 to 16.4. Sloup is tons of fun to watch. He exudes energy and a passion for the game. One of the lasting memories of the 2018-19 season involved Sloup back-cutting Briar Cliff to death in the aforementioned upset. Sloup is a gym rat with a positive attitude that rubs off on his teammates.

A Crete High School alum, Kent may have the highest ceiling of anyone in the program. He averaged 10.4 points while stepping into the spotlight as a freshman. It helped to have the experience of Sloup and Shuck alongside him. Shuck is the team’s most experienced player. He has racked up 1,123 points over 92 career collegiate games. Kent and Sloup will likely follow Shuck into the 1,000-point club.

Says Limback of Kent, “You can see his athleticism and his strength levels growing. The work he put in this summer has been huge for him. He’s a guy that has tremendous ability. He’s a perfectionist and works at his game. I think he is in for a great season.”

Kent, Shuck and Sloup are looked at as the ‘big three’ in terms of scoring, but the Bulldogs return five others who have starting experience at the collegiate level. In his first season with Concordia after transferring from McCook Community College, 6-foot-8 Chuol Biel paced the GPAC in blocked shots (1.43) in 2018-19. He also supplies highlight reel dunks and a much needed defensive presence in the post. The 6-foot-7 Sammy Adjei still has untapped potential. He put up 18 points in last season’s final game at Morningside.

“Sammy’s continuing to get in condition and was able to work on his game around here this summer,” Limback said. “It was a big summer for him. Chuol has added some weight. He’s put 10-15 pounds back on and is looking really good right now. He’s always had the ability defensively but I think offensively he’s looking sharper. For both of those guys last year was their first time through the GPAC. Now they know kind of what to expect and who the horses are in the league and what to play for.”

Loveland, Colo., native Justin Wiersema also saw plenty of action last season as a freshman. Wiersema started 13 games in 2018-19 and figures to make a jump forward this winter. Additional role players include frontcourt players in Ryan Holt, Tanner Wubbels and Klay Uher and guard Grant Wragge. The wealth of experience on board means that competition will be fierce for playing time off the bench.

Sloup has been encouraged by early indications during practice. Says Sloup, “I think last year we were kind of timid and not sure of what we could do as a team. This year there’s a lot of energy and a lot of excitement. I think we could do something special this year. There’s some pretty high expectations. We have high expectations for ourselves. Practice has been more competitive.”

Limback has stated that he expects this team to play faster than the one Bulldog fans saw last winter. Limback also wants his team to be more adept at limiting easy buckets for the opposition. Too often Concordia was beaten off the dribble and unable to prevent points in the paint. The 2018-19 squad’s negative turnover margin of 3.13 per game (last in the GPAC) also stands out as an area of weakness.

The Bulldogs hope to have some of those issues ironed out well before they enjoy their trip to Honolulu, Hawaii, just before Christmas. Another schedule highlight will be the Concordia Invitational Tournament at Concordia University, Chicago. Those contests, along with the GPAC grind, will reveal what this year’s squad is made of.

“The buy-in is excellent,” Limback said. “The guys are in it for the team. We preach team over me. I think they’re really believing that right now. We have good roster depth. There are guys that saw a few minutes last year that are really pushing to have larger roles. I think that’s been great. Our goal is to play faster than we did last year. Our pace of play will be different. Overall the buy-in has been really good these first couple weeks.”

The 2019-20 season will officially open at the Hastings College Classic Oct. 25-26 with games against Dakota State University and Friends University.