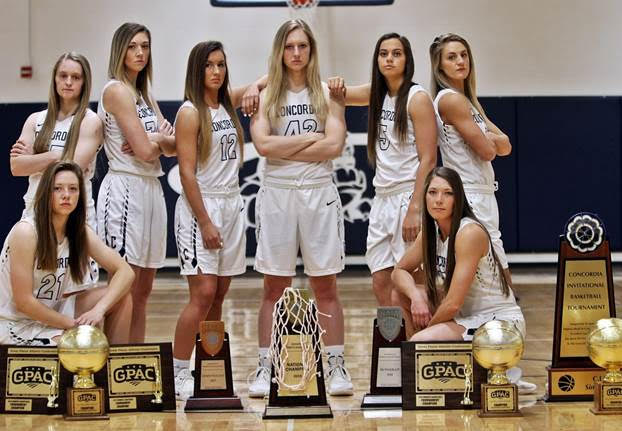 Outlook
The 2018-19 Concordia University women’s basketball team focused and then it finished. It took some time, but the reality of the journey that culminated this past March has sunk in. The oversized banner that hangs from the west wall inside Walz Arena won’t ever let anyone forget. Fans can also find a massive commemorative photo of the achievement displayed in the northeast corner of the arena.

Now the 2019-20 Bulldogs attempt to answer the question: how do you stay motivated a season after cutting down the final net in celebration of the program’s first-ever national championship? With so much firepower returning, Concordia will have to embrace the target on its back.

“It’s definitely different,” said 2019 NAIA National Coach of the Year Drew Olson, “That’s something we’ve talked about with our team. I think the biggest thing is they have a competitive greatness to them. They always want to be the best. They did it last year and they want to do it again. Especially for those six seniors there’s that feeling of wanting what Quinn (Wragge) experienced being able to end your career with that kind of a high. They want to end it the same way.”

The Bulldogs have a new motto this season: “be bold in the pursuit” (1 Peter 4:10). There are different ways of interpreting what that means to this edition of Concordia women’s basketball, but anything short of another national championship would probably feel like something of a letdown. Yeah, that’s crazy, but it’s where this program is at. Reigning GPAC Player of the Year Philly Lammers and the rest of the senior class are a combined 105-8 over the past three seasons while advancing to at least the national semifinals in each of those campaigns.

“I think for us that means that we can state what we want to accomplish and we’re going to pursue that with laser focus,” said Lammers of this season’s theme. “We’re going to do everything in our power to achieve that. It’s okay if we say things like wanting to win another national championship, but then you’re going to back that up with actions and do whatever needs to be done to get there.”

This probably doesn’t even sound fair to the rest of NAIA Division II women’s basketball, but the Bulldogs return 17 of the 18 players who appeared in varsity game action last season. The exception is Quinn Wragge, the lone senior on the 2018-19 roster. No doubt the program will miss Wragge, the third leading scorer in school history. However, the combined improvement of all those returners over another offseason of training could make this squad an even better.

It may not seem as if Lammers could get much better than the already dominant versions of herself that have been on display in recent years. But she wants to be an even better leader. It also can’t hurt for her to sharpen all areas of her game. Lammers will present matchup problems for all teams with her strength and physicality. She also could be the program’s all-time leading scorer by season’s end (her 1,574 points are 480 shy of Bailey Morris’ record of 2,054).

“I ask for more leadership with her stepping into a senior role, to communicate more and to talk more on the floor,” Olson said. “I think she knows that she can raise her game even that much more in terms of rebounding and aggressiveness scoring-wise – hopefully staying out of foul trouble more often. I know she has high expectations for herself.”

Says Lammers of Barry, “She’s an incredible point guard for sure. If you just look at the basketball skills part of it, she can see the floor incredibly well, passes amazingly and she’s turned herself into a scoring threat too. Now the defense has to be aware of that as well. Emotionally she brings a lot of joy to the team all the time. She’s always energetic and she’s always present every day mentally and physically.”

A 5-foot-9 do-it-all guard from Waverly, Cockerill is the best pure scorer on the team. She earned honorable mention All-America honors last season, but it’s unlikely Olson would be really keen about trading her for any other two-guards. Cockerill filled it up with 40 points in the 2018-19 season opener and poured it on with 19 points to rescue the Bulldogs in the second round of the national tournament versus Cardinal Stritch. Olson says Cockerill is becoming an even better defender while complimenting her offensive prowess.

The senior class includes not only Barry and Lammers, but also key performers in Colby Duvel, MacKenzie Helman, Taryn Schuette and Riley Sibbel. They each have a role and understand how to perform it within Concordia’s system that creates chaos for the opposition. If this isn’t the greatest senior class in program history, it’s certainly in the discussion. Olson will have a hard time letting go of this group when this season comes to an end.

“It’s a really special group and we knew it when we were recruiting them and how all those pieces would fit together,” Olson said. “I love the heart of that group, how much they care about each other, how tough they are together and how much they’ve meant to this program.”

Duvel is a hard-nosed scrapper whose offensive game has made leaps forward. Helman does a little bit of everything as a guard. Schuette provides some scoring punch off the bench. Finally, Sibbel is a tenacious defender who earned a starting role last season. She also has the ability to knock down perimeter shots.

Then there’s sophomore Mackenzie Koepke, who appears to be a strong candidate to rise to stardom over the next three seasons. The Lincoln Lutheran product uses her length to disrupt the passing lanes and isn’t afraid to chuck it from deep. Plenty of others will add depth, such as sophomores Elsie Aslesen, Claire Cornell, Delani Fahey and Rylee Pauli. The way Olson’s program develops players, no one should be shocked if a star emerges from that group.

Now it’s time to boldly pursue another title. The preseason rankings have not been revealed, but it would be hard to imagine that Concordia would be ranked anything other than No. 1. Says Olson, “What they’re trying to do is a little bit unheard of.”

Despite having accomplished the ultimate goal last season, Lammers believes the 2019-20 Bulldogs are just as motivated as past teams. “That’s been something Coach has talked about quite a lot,” Lammers said. “I think a lot of our motivation is the same from last year in that it’s intrinsic. We bring it out in ourselves so it’s a lot of self-motivation. Obviously we don’t have that whole revenge factor going into it. That just means it’s so much more focused on us and what we can accomplish and what we can do.”

The Bulldogs will test themselves in an exhibition at NCAA Division I Creighton University. Tipoff in Omaha is set for 7 p.m. on Oct. 22. The season will officially get started at the College of the Ozarks Classic on Oct. 25 when Concordia takes on Sterling College in Point Lookout, Mo.