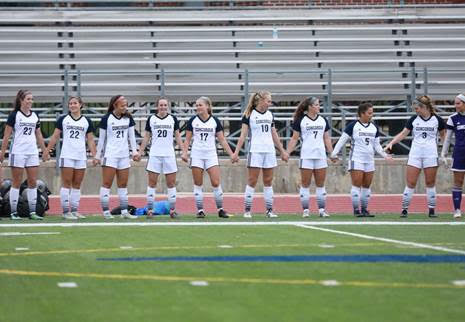 Outlook
The program knew it would face a different dynamic this preseason when previous head coach Greg Henson announced on July 9 that he would be taking over the women’s soccer program at Ferris State University. Despite Henson’s departure, the entire 2019 roster remained intact. The Bulldogs understand they have a good thing going here with an active run of five-straight GPAC tournament championship game appearances.

In place of Henson steps Chris Luther, who has extensive experience as a head coach at both the collegiate and high school levels. Luther joined the Concordia women’s soccer staff as an assistant last season, meaning he already has a strong feel for what this program is about.

The staff and players moved on this preseason. Says junior goalkeeper Lindsey Carley, “We were definitely all disappointed when we found out that we wouldn’t have Coach Henson with us this fall. I think we built a really solid foundation in the spring and we have a lot to build off going into this fall. Obviously we’ll miss having Coach here, but I’m confident that Coach Luther will do a good job. I think our team has really come together. We have a lot of high standards for ourselves this fall.”

Henson built the program into a conference power. Over the previous five seasons, the Bulldogs have gone a combined 73-19-15 with two NAIA national tournament appearances, two GPAC tournament titles and a conference regular-season championship. The trick now is to keep things rolling in a league that has gotten better. Both Midland and Hastings are ranked in the top 12 nationally in the preseason.

The significant departures include one of the program’s all-time greats in Maria Deeter, the fleet-footed Martin twins (Ashley and Lauren) and reliable starter Taylor Roby. However, talent remains with veteran leaders in Carley and midfielder Tori Cera. Concordia appears especially strong right up the middle of the field. Many elements are in place for continued success in terms of wins and losses.

“I’m going to take us back to last spring when we were playing without our senior class,” Luther said. “We had a very successful spring. That was really exciting for us to watch how well we did and built on that. All of those players have returned. When you look at the spine of our team the core is very strong. We just have to fill in the pieces on the outsides to compliment that core in the middle.”

With the aforementioned 2018-19 seniors having graduated, Cera will take on more of the spotlight. The Las Vegas native has the versatility to play all over the field and showcases a powerful leg in set piece situations. Cera supplied the team’s highlight reel goal of last season when she unleashed an eye-opening goal from roughly 40 yards out. Beyond the obvious ability, Cera stands out for her consistently high level of play.

In terms of pure game experience at the college level, Carley, Cera, as well as seniors Becky Freeman, Morgan Raska and Brynn Suddeth and junior Michaela Twito are the team’s most veteran players. Then there’s also the group of second-year up-and-comers such as Madeline Haugen, Mikeila Martinez and Cheyenne Smith that now take on larger responsibility. Raska (we wouldn’t dare call her “Scooter”) has played in the most career games of anyone on the team with 50.

“Probably the most exciting thing about this is the roster that Coach Henson left me,” Luther said. “We have a really good returning group of girls and our freshman class coming in were all top quality recruits. Fortunately we didn’t lose anybody (after the coaching change). I think our personnel is probably what I’m most excited about.”

Luther has been working on putting the pieces in the right places since players reported for fall camp on Aug. 8. The Bulldogs lost some firepower with the careers of Deeter and Lauren Martin coming to an end, but Luther wants his team to be offensive-minded. Suddeth found the back of the net 12 times (three hat tricks) in her first season at Concordia while Freeman is next in line among returners with her seven goals last fall.

The 65 goals scored last season were the second most during the Henson era and the third most in program history. Can the Bulldogs push that number even higher in 2019?

“We’re going to look at scoring goals more so than we did last year, which was a successful campaign,” Luther said. “We’re going to put some pressure on them offensively and maybe put the pressure on a little bit higher and try and turn the ball over closer to the opposing goal. We’re still going to be a possession-based team and work hard at defense. We’ll still try to shut teams out, but I think we’re going to work the attack a little bit more.”

Carley and the back line can be a security blanket on occasions when goals are tough to come by. Named the 2017 GPAC Defensive Player of the Year, Carley enters this season as a two-year starter with two seasons of eligibility remaining. She is already one of the top keepers in school history with her goals against average of 0.75 ranking No. 1 all-time. Smith can also play keeper and is just as valuable as a center back.

The program’s runs to the GPAC championship game have always gotten a boost from at least one key newcomer. Some of the top candidates to emerge from the freshman class are midfielders Aliyah Aldama and Jaiden Beecher, defender Ellie Eason and forward Isabel Sloss. Beecher is an Omaha native while the other three come from out west.

It will also be helpful to have junior forward Sarah Wuthrich healthy for a full season. The question becomes: will the sum of these parts be enough to compete at the top of the league once again? Hastings is going through a coaching change of its own while Midland has a surplus of talent returning from a team that reached the national quarterfinals.

Henson instilled a confidence that this program could go out and compete with anyone. That mindset doesn’t appear to have changed. The upperclassmen still have GPAC championship heartbreaks in each of the past two seasons fresh on their minds.

“The past two seasons we got to our goal, but we didn’t get the end result that we wanted,” Carley said. “Definitely coming into this season you have to keep pushing for that championship title in the tournament. That’s definitely a big motivator to finally be able to say you finished the job.”

The 2019 campaign will get underway on Saturday, Aug. 24 when the Bulldogs are slated to host Missouri Valley College. The nonconference slate will include plenty of challenges.

Says Luther, “In the preseason especially we’re trying to figure out who goes where and put the pieces of the puzzle together. That’s probably going to be our most important thing before we get into the game schedule.”