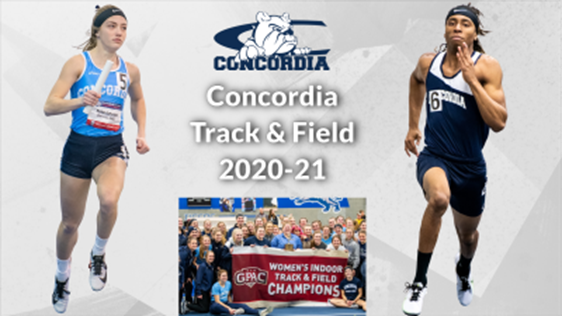 Outlook
The long awaited return to competition is almost over. After COVID-19 wiped out the entire 2020 outdoor season, the storied Concordia University Track & Field programs picked up preparation this August for the 2021 indoor season. The last time the Bulldogs competed publicly, both Rachel Battershell and Jacob Cornelio celebrated individual NAIA national titles. Those momentous performances occurred all the way back in March.

Anticipation is growing for what the first meet will bring. Another December kickoff meet will provide a barometer for where Concordia athletes stand right now. Entering his fifth season as head coach, Matt Beisel oversees a program that always aspires to reign atop the GPAC.

Said Beisel, “They’re ready to roll. They’re itching to compete. It has been almost a year since they’ve been able to do their thing and they’ve all been working towards this for so long. They’re pumped.”

The 2020 indoor season yielded GPAC finishes of first for the women and third for the men along with 14 combined All-America awards, two individual national titles and a fourth-place NAIA nationals team trophy for the women. As a sophomore, Battershell put together one of the all-time great indoor seasons in school history while earning GPAC Athlete of the Year honors and breaking the school’s 400 meter record. She’s essentially the posterchild for what is possible for a Bulldog athlete.

However, it takes more than just Battershell to ascend to the heights Concordia has reached in recent years – and to climb as high as it hopes to in the future. The Bulldog women won seven of 19 events at the 2020 GPAC indoor championships as part of a dominant showing. Beisel and his staff have been working to maintain that type of depth on the women’s side while putting the men on a similar path.

“We need to continue developing and building our recruiting classes to bring in kids in every event area who can provide competitive depth,” Beisel said. “There aren’t just one or two events that we focus on. Every year we’ve gotten a good range (of athletes). We had 57 freshmen come in this year, covering every event area – and they’re really good. We’ll keep on working towards (building depth).”

It takes a long time to rattle off the names of potential national qualifiers for a squad that expects to again be one of the top women’s teams in the NAIA. In addition to the names mentioned above, the Bulldogs welcome back All-Americans such as Mika Brees (4×4) and Morgan De Jong (weight throw), who add to a well-rounded team. There’s a culture of excellence in which success is expected inside and outside of competition. Battershell and her teammates have definitely thought about what it might take to win a national title as a team.

Says Battershell, “You can see it every day. Whether or not someone is having a good day, we know we have had success in the past, but it is never taken for granted. We show up every day and we know what we are capable of as a team, which makes us push harder.”

Based on last season, the Concordia women can expect to be strong in areas like the hurdles, jumps, pole vault, multi-events, distance races and anything Battershell competes in. The pole vault crew includes not just a rising star in Puelz (who will also compete in hurdles), but also other past All-Americans in Erin Mapson and Pfeifer. The jumps group includes national qualifiers in Jamey Broman, Cora Olson and Katie Severt. Beisel also likes what he sees from the new class of throwers, a group that will lean on senior leadership from Sarah Ragland (two-time national qualifier).

“I think there is a spirt of high expectation,” Beisel said of the women’s outlook. “They’ve always had that. When I took over the program, it wasn’t any different. Now that we’ve had a string of wins there’s this desire to keep doing that. We want to win another national title. We’ve never won an indoor title.”

On the men’s side, the Bulldogs are still striving to catch back up to rival Doane. Chase Berry (pole vault) and Xavier Ross (400 meters) return after earning 2020 All-America honors. Concordia’s conference and national finishes were limited to some degree last season due to star Cody Williams being sidelined by injury. Named the 2019 GPAC Outdoor Athlete of the Year, Williams is back to health and ready to pursue his first career individual national title (placed as the 2019 heptathlon runner up).

Ross seems to have another gear in him as he enters his junior year. The Chicago-area native has hopes of challenging assistant coach Mark Samuels’ school record in the 400 meters and contributing to a GPAC championship team. Ross can see things beginning to come together for him and his teammates.

“We have had the largest freshman class this year,” Ross said. “I think we are looking very strong on all aspects. Throws are strong and the sprinting group is adding a lot more depth. We are going to see a lot of growth and maturity as a whole this season. If not this season, the upcoming season we will have a powerhouse of a squad.”

That large freshman class should help prop up the men’s team. So too should the continued development of up-and-comers such as sophomore Colton Meyer, who qualified for nationals in his first collegiate track season. In the distance group, top runner Camden Sesna is eyeing a return to health after being hobbled towards the end of cross country season. Past pole vault national qualifiers include Tucker Platt, Sam Sisco and Williams. Freshman Zach Zohner, one of the top new men’s athletes, also figures to be a factor in the vault.

Furthermore, well-regarded throws coach Ed McLaughlin will coach up a young men’s throws group (led by veterans such as Andy Amos) expected to make a leap forward. Elsewhere, the 4×400 relay remains strong (with help from Meyer, Ross, Henry Reimer and others) and Beisel expects contributions from Bulldogs who are transitioning from other sports – Jacob Jennings (basketball) and Cade Kleckner (baseball). Past All-American Christian Van Cleave headlines the mid-distance group.

Says Beisel, “You put all those pieces together and I think we’re going to be a much stronger team this year. I’m excited to see what they do.”

A star group of senior throwers will be back to use up their outdoor eligibility this spring. That bunch includes national champions Jacob Cornelio (2020 weight throw) and Addie Shaw (two-time discus national titlist) as well as national qualifiers Jerod Peters and Bethany Shaw. In other words, Concordia appears to have even greater scoring potential come outdoor season.

The indoor season will get underway at this weekend’s Concordia Early Bird Meet slated for Friday and Saturday inside the Fieldhouse. The Bulldogs are scheduled to host four home meets prior to the GPAC Indoor Championships (Feb. 19-20). The NAIA National Championships for indoor will be held in Brookings, S.D., with the outdoor national meet set to be staged in Gulf Shores, Ala., once again.

“Both our men and women drive themselves to win the conference title and put ourselves in a position to be able to win more national titles,” Beisel said. “That is what they talk about. They all have individual goals, but I think there’s a really good synergy and team spirit in regards to thinking about their teammates as much or more than themselves. That’s what drives so many of them to even greater things than they thought were possible.”

Battershell: “(Winning a team national title) is so excited to think about. I know it is on everyone’s minds. There is so many factors that play into earning the national title as a team but if everything comes together it will definitely be a possibility.”

Ross: “My goal is to break Coach Samuels indoor 400 record. That is what I am motivated for and gunning for. My teammates are my motivators as well, especially the underclassmen. I want to see them shine and that is what keeps me going.”