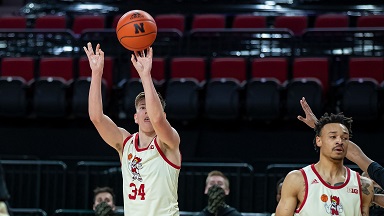 Nebraska led 49-46 after Teddy Allen’s jumper with 13:14 left, but Purdue took control over the next six minutes, as Sasha Stefanovic had eight of his 14 points off the bench, including a pair of 3-pointers in an 8-0 run which stretched the Purdue lead from six to 14 with 6:50 remaining.

Jaden Ivey paced the Boilermakers with 15 points, while Brandon Newman added 10 points and seven rebounds. NU limited Trevion Williams, who was averaging 16.4 points per game and had 28 against Michigan State, to just nine points on 4-of-8 shooting in 21 minutes.

Shamiel Stevenson led the Huskers (5-15, 1-12 Big Ten) with 10 points off the bench, as the Husker reserves combined for 37 points, their highest total of Big Ten play. Thorir Thorbjarnarson, Kobe Webster and Trey McGowens had nine points each, while Yvan Ouedraogo had seven points and a team-high eight rebounds.

The Huskers stay in Lincoln to host Penn State on Tuesday, Feb. 23 at Pinnacle Bank Arena. The game tips off at 7 p.m.