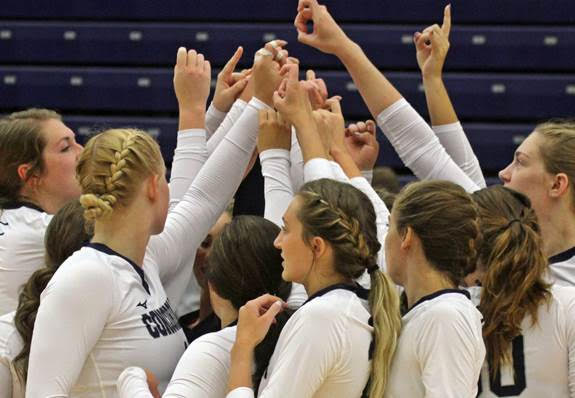 ORANGE CITY, Iowa – So far so good through six sets of action on the young season for the Concordia University volleyball team. Emmie Noyd and Camryn Opfer led the way on the attack that got rolling towards the end of the first set in a 25-19, 25-9, 25-20, victory Baker University on Friday (Aug. 23) evening. The match was the first of three that the Bulldogs will play at the Red Raider Classic in Orange City, Iowa.

“We had a great second set,” Boldt said. “I told them after that second set, ‘This is where we need to get better’ – sustaining that moment all the way through the end of the match. Baker came out on fire, swinging hard in that third set. That’s something we need to be able to handle as we keep going. We got a good visual of what it’s going to be like and I was really happy to see us grind through the middle of that third set.”

The first set was back and forth before Concordia turned on the jets in the latter stages. According to Boldt, his team’s tempo needed to be ratcheted up. There were no complaints to be made in regards to the second set. In that snapshot, Noyd and Opfer starred with four kills apiece, spurred by Tara Callahan (13 of her 33 assists came in the second set).

The Bulldogs emerged with advantages all the way around. They out-blocked the Wildcats (3-3), 7-1, while stifling the opposition to the tune of an .058 hitting percentage. Boldt credited Opfer with executing blocks that helped break Baker’s spirits. Opfer was in on three blocks. Her work aided in limiting powerful Baker hitter Taylor Bell to a stat line of seven kills and six attack errors.

“That ball just pops right off her hand,” Boldt said of Bell. “It was important for our blockers to be in the right position with strong hands, or else that thing was going to get tooled right off the block. We had to change our block setup on one of their right sides because she’s a lefty. She was taking it down the line so we had to move our block out a little bit more. Once we got it figured out I thought Cam had a couple of really good blocks that kind of got them out of the game.”

Boldt has a surplus of capable defensive specialists at his disposal. On this particular night, Kaylie Dengel topped the back row with 11 digs. As part of a balanced statistical match, Callahan produced eight digs to go along with five kills. Marrissa Hoerman added seven digs.

Noyd has feasted in the opening two matches. After drilling 16 kills on a .583 hitting percentage versus York, Noyd mashed a team-high 13 kills via a .600 percentage (only one error) on Friday. Opfer had the most attacking opportunities and cashed in with nine kills (.381). Kara Stark chipped in seven kills on 15 swings. As a team, the Bulldogs hit .323.

Concordia will attempt to pass two more tests in Orange City on Saturday. First up is a 9 a.m. CT meeting with Wayland Baptist University (Texas) (0-2). The Bulldogs will then take on No. 19 Corban University (Ore.) (2-1) at 3 p.m. to close out the first week of the regular season. Both matches can be heard live on 104.9 Max Country.