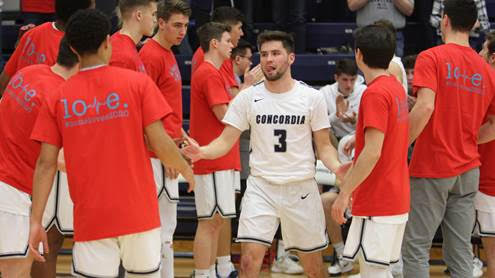 SEWARD, Neb. – The roles were completely reversed as compared to the matchup that took place two months earlier in Yankton, S.D. While celebrating six seniors, the Concordia University men’s basketball team avenged its most lopsided loss of the season by routing visiting and 18th-ranked Mount Marty, 98-74, on Saturday (Feb. 15) afternoon. In perhaps his final appearance inside Walz Arena, Brevin Sloup put home a game high 29 points.

Head coach Ben Limback’s squad had to have this one in order to keep hopes alive of earning a top-four seed in the GPAC tournament. Currently, the Bulldogs (19-9, 10-8 GPAC) are tied for fifth place in the league standings.

“I felt like there was a great competitiveness to our guys and you expect that on senior day and with the GPAC standings and all the things we’re playing for,” Limback said. “I thought our defensive execution, especially in the first half, was huge. We keyed in on the right guys. I felt like our guys were mentally locked in.”

The hustle and energy plays went the way of the Bulldogs all afternoon. They demolished the Lancers on the boards, 51-23, and figured out a way to contain the dynamic Chris King. The senior guard started the game 1-for-10 from the floor while being guarded mostly by Carter Kent. By the time King got going, his team faced a mountain to climb. Concordia led by 13 or more points for the entire second half.

As proven throughout this season, the Bulldogs can play on the level of just about anyone when things are going right – and when the shots are falling. Concordia made 33-of-61 (.541) attempts from the field while five players scored in double figures, including Justin Wiersema (19), Kent (16), Tanner Shuck (14) and Gage Smith (10). Just when Mount Marty (19-9, 10-8 GPAC) threatened to make it a game in the second half, the seniors shut the door.

Sloup initiated a 14-3 run with seven-straight points (four free throws and a trey) that turned a 13-point lead into an 86-62 advantage with under five minutes to play. If this has to be the final home game for The Mayor, it was quite a way to go out.

“All I can say is the four years have gone by really, really fast,” Sloup said. “I just think back to my freshman year with Eli (Ziegler), Chandler (Folkerts) and Seth (Curran) – all those guys on senior night. I was just like, ‘This is long time away for me.’ It really snuck up on me fast. I’m really happy for the team and how we came out and played. It was a special night for sure.”

Mount Marty was limited to 42.4 percent shooting and it did not get too many second chances (only four offensive rebounds). Also a senior, Chuol Biel brought down 11 rebounds and Smith grabbed eight off the bench. King equaled a team high of 15 points, but he went 4-for-16 from the floor in a sharp contrast to the game he had versus Concordia in Yankton (eight treys).

“I’m so proud of our seniors,” Limback said. “Brevin obviously with 29 points was amazing. So was Tanner Shuck. It’s just fun to go out this way in the regular season at home. Hopefully we have another home game.”

The regular season will conclude next week with a pair of road trips. Next up, the Bulldogs will be at Midland (9-16, 5-13 GPAC) for an 8 p.m. CT tipoff in Fremont. Concordia took the first meeting that unfolded on Nov. 12 in Seward by a final score of 95-71. Kent posted 28 points in that matchup.