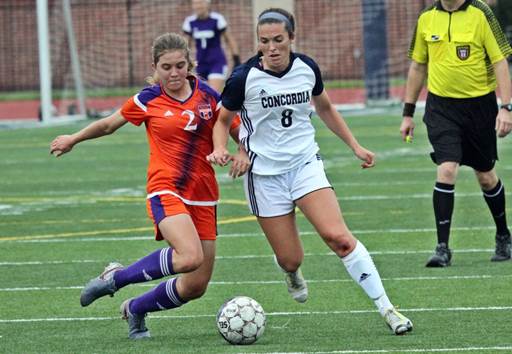 SEWARD, Neb. – The opening eight minutes of the 2019 season produced forgettable moments for the Concordia University women’s soccer team. A revamped lineup eventually settled in, but not in time for the Bulldogs to get the result they hoped for. Missouri Valley College spoiled Concordia’s home opener by riding out a 2-0 victory inside Bulldog Stadium on an overcast and misty Saturday (Aug. 24) afternoon.

Chris Luther presided over his first game as head coach since taking over for Greg Henson, who vacated the position in July. The program has come to expect a lot of itself after claiming at least 13 wins in each of the previous five seasons.

“Looking at the first 10-15 minutes, we just came out flat,” Luther said. “Both teams looked like they were trying to feel each other out. We gave up that early goal and then the PK and all of the sudden we’re down two goals in the first eight minutes. The girls responded well. They kind of got their feet underneath them late in the first half. We started to kind of look like who I thought we should be.”

Luther’s opening game lineup featured four freshmen in Aliyah Aldema, Jaiden Beecher, Allie Downing and Ellie Eason. They were shown immediate trust while up against a squad that had beaten another GPAC foe in Jamestown, 2-1, four days earlier. Throughout the preseason, Luther has not doubted the talent of its roster. It just may take a little time for everything to mesh.

The Vikings (2-0) were certainly sharper out of the gate. In the fourth minute of play, an unmarked Yvette Belman, just inside the 18, delivered a strike from right to left that hit the crossbar and came down across the goal line. Less than four minutes later Missouri Valley celebrated a 2-0 advantage. Nicole Rubio cashed in on the penalty kick after a foul was called in the box.

“There’s a lot for them to learn and a lot in our system they need to figure out pretty quick,” Luther said of the youth in the lineup. “Some of that lack of knowledge and experience showed today. We’ll work on some things Monday with that … the postgame speech tonight was about how everything we did in the second half now becomes the new minimum expectation.”

Neither team had a corner kick opportunity in the first 45 minutes, but the Bulldogs began to open up the attack early in the second half and held a 7-5 shot advantage by game’s end. For the most part, both keepers were kept clean. Now in her third season as a starter, keeper Lindsey Carley made one save. Carley has experienced center backs in front of her with junior Tori Cera and sophomore Cheyenne Smith filling those roles.

A challenging nonconference slate will continue next week when the Bulldogs venture to Siloam Springs, Ark., for two matchups against foes ranked in the NAIA preseason top 25. First up will be a Thursday, Aug. 29 clash with Concordia going head-to-head versus host and 13th-ranked John Brown University.