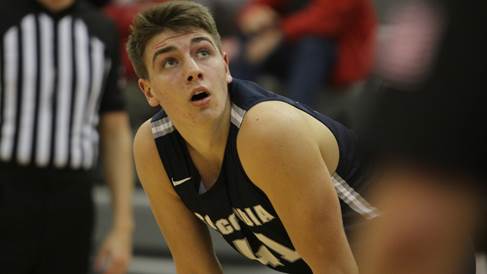 SIOUX CENTER, Iowa – The result may not have been what the Concordia University men’s basketball team had hoped for, but it’s play on the court was vastly improved from its previous two road outings. Despite making 13 treys, the Bulldogs endured an 86-76 loss at Dordt on Saturday (Feb. 8) afternoon. A major difference proved to be the 21-for-26 foul shooting by the Defenders.

Head coach Ben Limback’s squad went 0-for-3 in its string of three-straight road games. The picture within the GPAC standings remains murky, but Concordia (17-9, 8-8 GPAC) has dropped to seventh place for the moment.

“I thought we had a great mentality on the road against a very good team,” Limback said. “We played with much better competitiveness today. During the second half both teams were scoring back and forth and they went on a run. They hurt us off the bench. I told our guys that our intensity and our effort was there, we just didn’t rebound well enough or make enough plays. We know every game is big right now.”

After two-straight games of being held below 60 points, the Bulldogs managed to find some offensive production with four different players finding their way into double figures. It was a breakthrough for Gage Smith, who made each of his first five attempts from 3-point range on his way to 15 points. Concordia needed every bit of that help with the Defenders (19-8, 10-7 GPAC) shooting 47.5 percent from the floor and consistently getting to the free throw line.

Marcus Winterfield put together a monster day off the bench for Dordt. He went for 21 points and seven rebounds in 19 minutes of action. He helped put the game away in the final minute by going 4-for-4 on free throws after the Bulldogs had gotten within five points. Smith’s 3-pointer with 1:15 left marked the final points of the game for Concordia.

Ryan Holt also gave solid minutes off the bench. All 11 of his points came after halftime. Brevin Sloup and Tanner Shuck equaled Smith for a team high with 15 points apiece. Sloup added seven rebounds, four assists and two steals to his line. Chuol Biel grabbed eight boards to pace the Bulldogs, who were outrebounded, 37-31.

“We wanted to get that taste out of our mouth (from the previous two road games),” Limback said. “We go to half up one and sustained some of their early runs. Down the stretch it was a great fight. We missed some key shots and had some turnovers. We have to finish plays. Every game right now feels like a playoff game. We have to have that mindset.”

Exactly half of Dordt’s points were delivered by its bench. The Defenders are making a push of their own for a potential national tournament berth. They reside in fourth place, but are within shouting distance of second. Concordia won this season’s first meeting with Dordt, 91-79, in Seward.

The road swing ends on Wednesday when the Bulldogs return to Walz Arena to host Hastings (13-13, 6-10 GPAC) for an 8 p.m. CT tipoff. Concordia has had the Broncos’ number, winning each of the last seven meetings in the series. That streak includes this season’s 83-62 Bulldog victory that occurred on Jan. 8 in Hastings.