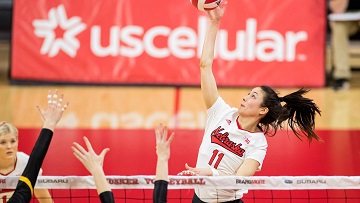 Nebraska volleyball senior outside hitter Lexi Sun has been named Big Ten Player of the Week for the second time this season, the Big Ten Conference announced on Monday.

Sun posted 4.33 kills per set with a .408 hitting percentage in two sweeps over Iowa last week. The Encinitas, California native also averaged 3.00 digs per set and tallied four blocks and two aces. She tallied 12 kills on .526 hitting against Iowa on Saturday, and she had a double-double of 14 kills and 12 digs last Wednesday at Iowa City, hitting .333.

Sun earned her second Big Ten Player of the Week honor in the last three weeks. For the season, she leads the Huskers in kills at 3.98 per set and aces (16).