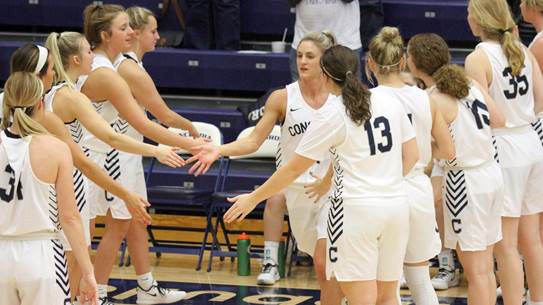 ORANGE CITY, Iowa – A place that had formerly been a house of horrors has become the site of three Bulldog victories over the past four seasons. Stars Grace Barry and Philly Lammers shined once again as the top-ranked Concordia University women’s basketball team emerged from the Bultman Center in Orange City, Iowa, with a 97-81 victory. The Bulldogs overcame host and 12th-ranked Northwestern shooting 48.4 percent from the floor.

The contest on Thursday (Jan. 2) marked the first of three in a row against teams ranked in the top 12 of the national poll. Head coach Drew Olson’s squad remains unbeaten in conference play at 8-0 (13-1 overall).

“This was a really good win for us tonight,” Olson said. “I was happy with how many different people stepped up and made plays. It felt like we were just kind of trading baskets at times in those second and third quarters and then we really defended in the fourth quarter. We shot the ball well and had a good team performance at a tough place to play.”

Concordia needed the type of offensive performance it showcased while up against a Red Raider team that looks quite a bit different than the one that reached the national semifinals last season. The Bulldog starters were up to the task. Barry went 8-for-13 from the floor and led the way with 18 points, Lammers made 8-of-12 shot attempts and put up 17 points while Riley Sibbel drilled 3-of-5 from 3-point range and totaled 15 points.

Barry and the Dawgs sealed the deal in the fourth quarter by building the lead to as many as 19 points. It mostly an anticlimactic finish. Northwestern (10-3, 5-3 GPAC) never got any closer than 15 points over the final eight minutes of play. Though Concordia allowed the Red Raiders to hover near 50 percent shooting, it held standout Sammy Blum to 4-for-15 shooting. As a team, Northwestern went just 6-for-23 from 3-point range.

Olson relied mostly on his starting five, each of whom played 26 or more minutes. However, MacKenzie Helman and Rebecca Higgins added eight points apiece. Both knocked down two treys. Mackenzie Koepke was especially hot in the first half and totaled 13 points while making four 3-point field goals. Barry spurred the attack with nine assists.

Olson had plenty of praise to go around afterwards. Koepke provided a lift early and Sibbel went wild for 10 points in the four quarter. Taryn Schuette also had a personal 5-0 run at one point. Meanwhile, Colby Duvel paced the team with seven rebounds. Concordia’s turnover advantage was a fairly modest plus-five. The top scorer for Northwestern was Alexis Toering with 16 points.

Lammers continues to push her way up the program’s all-time lists. She entered the night ranked fifth in program history in points, rebounds and steals. On Thursday evening, she passed both Quinn Wragge (1,776) and Kari Saving (1,773) on the scoring list. Lammers’ career point total now stands at 1,786.

The Red Raiders graduated three senior starters from last season’s team that shared the GPAC regular-season title with the Bulldogs. They remain solid behind the likes of Blum and a trio of sophomores that have made their way into the starting lineup.

Another showdown looms on Saturday when Concordia will host sixth-ranked Dordt (14-2, 6-2 GPAC) at 2 p.m. CT. The Bulldogs and Defenders split their two meetings last season with the home team winning in each instance. Concordia also has a date with fourth-ranked Hastings coming up on Jan. 8.