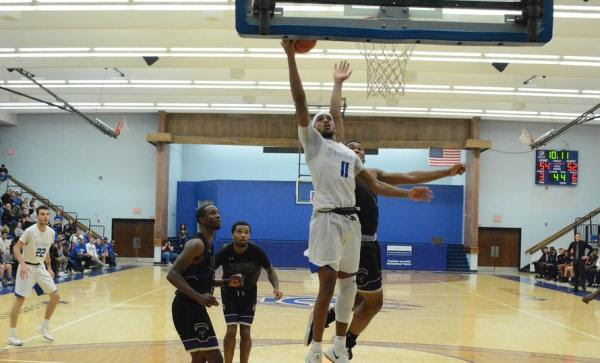 YORK – The Doane Tigers avenged their early-season loss against the Panthers by coming into the Freeman Center Saturday evening and scoring at will in their 87-78 win. Eric Lenear scored 20 second-half points to give York a fighting chance, but it was too little, too late.

Doane shot 63% from the field in the first half as they built a 15-point halftime lead. Then continued in the second half building their lead up to 23 at one point before the Panthers started to hit some shots. While the Tigers were hot from the floor, the Panthers couldn’t find an answer as they shot just 32% from the field. York tried finding their groove from deep but went 6-for-21 in the half. The second half wasn’t much better for York as they shot 3-for-12 from beyond the arc.

York jumped out to a 14-9 lead, but the Tigers went on a 12-2 run followed by a 15-0 run, both of which spanned over eight minutes of game action. The Panthers battled back in the final five minutes of action, going on their own 12-1 run to cut their deficit to eight points. Unfortunately, with less than 30 seconds to play the Panthers couldn’t get any closer as they fell 87-78 to the Tigers.

Lenear led all scorers with 22 points. Lance Ewell added 14 points, and Michael Tolbert contributed 13. Eric Fox was the leader off of the bench scoring 11 points. The Tigers had five players in double figures for a balanced effort against York.

The Panthers move to 4-2 on the season and will open up KCAC play this Wednesday as they host Avila University. The game is scheduled for a 8:00 p.m. tipoff.