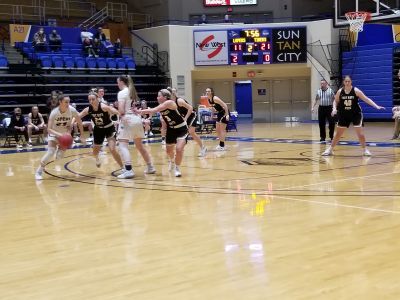 This game was originally set for December but postponed to January 26. The recent winter storm then pushed it back two more days. The Tigers (10-2) host the Lopers (12-1) in a regularly scheduled game Saturday afternoon in Kansas.

The 95th all-time meeting between the two saw Hays outscore UNK 23-9 in the second quarter and go on 12-1 run early in the fourth. That added up to the Tigers being the first team to crack 60 points against the Lopers this year. Shooting 46 percent (24 of 52) from the field, Hays also held UNK to a season-low point total.

“Second quarter we struggled and that definitely was the difference. We gave them some easy stuff in transition and a couple of uncontested jumpers. They are a team that if you give them those things they are going to capitalize,” UNK head coach Carrie Eighmey said. “We lost people in transition, didn’t communicate some matchups and had a little confusion.”

Oklahoma State transfer and senior guard Jaden Hobbs paced the Tigers with 16 points and six assists with senior wing Whitney Randall adding 13 points, three boards and three steals. Junior guard Cydney Bermann then supplied a team-best 11 rebounds and six points. Hays was plus three on the glass, 37-34; the Lopers came in with a plus 9.8 rebounding margin.

The big second quarter featured 5 of 8 three-point shooting by the Tigers. Randall hit two of them with freshman Emma Ruddle hitting another. She had seven second quarter points after having six points on the entire season. Hays finished 7 of 13 from long distance with UNK going 6 of 22. Loper opponents came in shooting only 21 percent from the arc.

The Lopers finally got going when they fell behind 41-20 early in the second half. Outscoring the Tigers 17-8 in the third quarter, a shot in the lane by Kansas junior Elisa Backes made it 41-32. However, Hobbs picked up a loose ball at the other end of the court and with the shot clock winding down stuck one of her two threes to quiet the crowd.

UNK still kept coming, getting a steal and layup from Crofton senior Kelsey Sanger to trim the deficit to 46-40 with 8:35 to play. That was the closest the Lopers had been since early in the second quarter. But Hays countered with that 12-1 spurt to salt things away. Randall and Hobbs each converted three-point plays during this three-minute stretch with UNK missing three shots and having two turnovers.

“Defensively (in the third) we were a little bit more locked in. Play with better energy and effort and had better attention to detail on some things,” Eighmey said. “Offensively we were able to create some good opportunities around the rim.”

“We learned you have to be locked in and ready to go every game because we’re getting everyone’s best shot. Not having Haley maybe had us a little bit out of rhythm,” Eighmey said. “But if we play like we did in the second half we put ourselves in a much better position to win the game.”