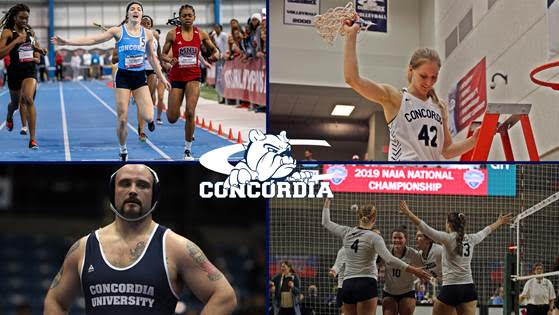 Plenty of memorable team and individual moments occurred during the 2019-20 Concordia University Athletics season, which ended with the Bulldogs on top of the GPAC All-Sports Trophy Standings. Concordia teams combined for seven total GPAC championships this academic year while also making a splash on the national scale.

In this exercise, we focused on the top plays of 2019-20. If a particular team moment was pinpointed, it had to be focused around a specific play or set of plays in order to make the list. Weight was given to the gravity of the plays involved as well as the sheer highlight reel quality of the sequence. No single sport was allowed to have more than one play on the list. Check out the video below for a countdown of the top 10 plays of the 2019-20 athletic year.

10. Camry Moore stars as softball jumps out to 12-2 start

We took some liberties here in that this was about more of a sequence of excellent work from sophomore Camry Moore. The Crete High School product was hitting .422 with four homers and an .889 slugging percentage while going 7-1 with a 1.27 ERA as a pitcher. Featured in the video is Moore’s no-doubter home run in a win at Bethany College.

Junior Michaela Twito’s golden goal in double overtime made it a memorable senior day for women’s soccer. Twito was set up perfectly on a free kick by Tori Cera for the game winner as Concordia defeated Doane, 3-2.

Jason Weides will tell you this goal was about as impressive as any he’s seen in his 12 years leading the men’s soccer program. From roughly 35 yards out, junior Garrett Perry struck the ball perfectly into the upper right corner of the goal in a game versus Midland on Oct. 9. Play-by-play voice Nick Holmes described the goal as an “absolute belter.”

This was a coming out party for sophomore receiver Cayden Beran, who made 10 catches for 193 yards and two touchdowns in a 44-0 rout at Hastings on Sept. 21. Many of Beran’s catches were of the spectacular variety. Beran led the Bulldogs with 49 catches for 701 yards on the season.

It should be noted that Nick Little also threw a no-hitter during this abbreviated season. The combo of Jason Munsch and Little was devastating to opponents. Munsch’s four and final start of 2020 resulted in a seven-inning no-hitter at Briar Cliff in which he struck out 16 Chargers.

Playing inside the rambunctious Corn Palace, host Dakota Wesleyan made a serious threat to come all the way back from a deficit as large as 17 points in the GPAC tournament championship game. The Bulldogs ultimate celebrated a nail-biting 68-66 win. It likely would not have turned out that way if not for a pair of clutch treys from Tanner Shuck that helped hold off the Tigers.

It was a historic moment on Dec. 3 when junior Arleigh Costello’s block resulted in match point for Concordia. The Bulldogs had beaten 19th-ranked Montana Tech and secured the program’s first-ever national tournament win while heading to the round of 16 for the first time. Concordia finished the season ranked 14th in the NAIA.

The former University of Nebraska offensive lineman made big waves when he joined the wrestling team for the second semester. In the heavyweight national semifinals, Tanner Farmer fought off an attempted head lock and pinned sixth-ranked Justin Harbison of Providence. Farmer lost in sudden victory in the championship match and finished with a 26-1 record.

Accomplished senior Philly Lammers reached the 2,000-point mark in style when she drove the left baseline and threw the ball off the glass for two before crashing to the floor. Lammers put up 21 points on that day (March 3) as Concordia defeated Hastings in the GPAC tournament championship game. Lammers concluded her career with 2,033 points and was just the second player in program history to notch 2,000 or more.

The indoor track and field season came to an end with both Rachel Battershell (400 meters) and Jacob Cornelio (weight throw) reaching the pinnacle in their specific disciplines. Not only did Battershell win a national title, she also broke a 31-year-old school record in the 400 meters. Both Bulldogs were national champions for the first time in their careers. From a team perspective, the Bulldogs placed fourth nationally on the women’s side and 17th on the men’s side.