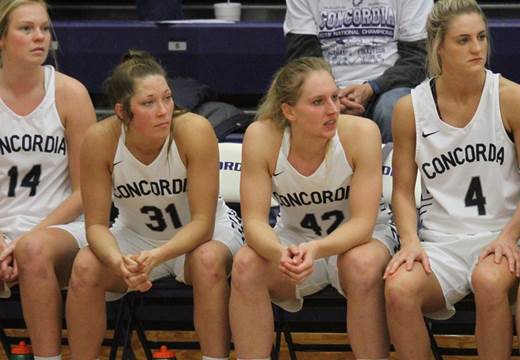 SEWARD, Neb. – The mismatch that appeared on paper played out on the court on Wednesday (Dec. 4) as the top-ranked Concordia University women’s basketball team returned to action for the first time since Nov. 23. The latest result was another staggering blowout as the Bulldogs bullied rival Doane, 110-47, inside Walz Arena. Concordia is 57-1 over its last 58 home games.

From Concordia’s perspective, this one looked about how they expected it to look. The pressure of the Bulldogs caused 40 turnovers and limited the Tigers to 31.0 percent shooting. A modest 6-4 early lead for Concordia gave way to a commanding 53-10 halftime advantage. Before resting much of the fourth period, reigning GPAC Player of the Year Philly Lammers notched 20 points and seven rebounds on 10-for-16 shooting from the floor.

As has become the usual this season, plenty of opportunities surfaced for players up and down the roster. Aslesen took advantage and collected 19 points (8-for-13 from the floor) and six rebounds off the bench. Many Bulldogs were the beneficiary of dimes dropped by Grace Barry (seven assists) and MacKenzie Helman (nine assists). Barry and Schuette added 10 points apiece.

Concordia eclipsed the 100-point mark for the sixth time already this season. This may sound like a broken record, but the Bulldogs were balanced again. Eleven players put up four points or more. Also off the bench, Taylor Farrell and Pauli registered eight points apiece and Claire Cornell and Rebecca Higgins both chipped in six points. Colby Duvel also had six points for a Bulldog team that shot 53.3 percent from the floor.

Doane (1-8, 0-4 GPAC) will continue on this season without the head coach that it began the year with. Ryan Baumgartner now serves as interim head coach. Freshman Halle Konz topped the Tigers with 12 points (6-for-7 from the floor). Doane had just earned its first win of the season this past weekend, 65-56, over Haskell Indian Nations University (Kan.).

The Bulldogs will remain at home to host 13th-ranked Dakota Wesleyan (8-2, 3-2 GPAC) at 2 p.m. CT on Saturday. The two powerhouse programs have met in each of the last three GPAC tournament championship games. Concordia has won seven of the past eight series matchups, including all three last season.