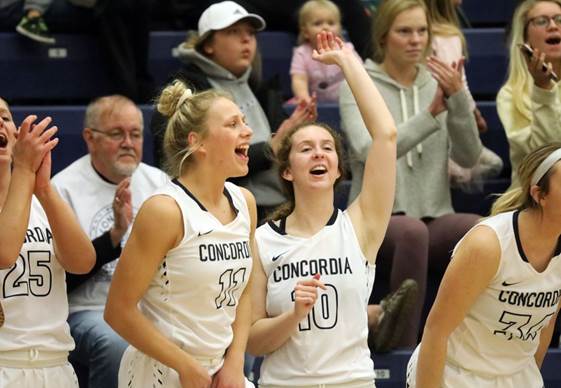 All 15 Bulldogs who made the trip registered in the scoring column for head coach Drew Olson’s squad. The win over Sterling marked day one of two at the weekend classic hosted by College of the Ozarks.

“I really was impressed with our bench group,” Olson said. “Our second and our third line was just really effective and did a great job moving the ball and hitting the open player. They stepped up and did a great job. It was really fun to watch.”

Fun to watch but maybe not so fun to play against. All fifteen Bulldogs who traveled scored points and made life miserable for the Warriors, who were tagged with 43 turnovers. The bench combined for 74 points in an ultra-balanced attack. Concordia’s top four scorers were all reserves: Taryn Schuette (12), Delani Fahey (11), Elsie Aslesen (10) and Rebecca Higgins (9). Together they helped the Bulldogs devastate Sterling from 3-point range, where they were 16-for-35 (.457).

Olson and his team are just beginning to adjust without 2018-19 leading scorer Taylor Cockerill, who was forced out of the game at Creighton in the third quarter. Koepke moved into the starting lineup in her place on Friday. Freshman Averie Lambrecht also joined the varsity roster and wore No. 3.

“It’s still kind of a work-in-progress,” Olson said. “A lot of other players are taking advantage of the opportunity to get more minutes to help the team. In terms of who we are as a team, we’re still trying to figure out how to fill that hole. Nobody’s going to be able to do what Taylor did, but we have to figure out as a team how we’re going to be just as effective.”

Sterling is the highest rated team from the Kansas Collegiate Athletic Conference and a 2019 national qualifier. Concordia managed to hold reigning KCAC Player of the Year Kylah Comley to 2-for-9 shooting from the field (six turnovers). Bailey Bangert topped the Warriors with 16 points. All five Sterling starters turned the ball over five or more times.

As part of this weekend’s tournament, the Bulldogs will return to action on Saturday and go up against a fellow NAIA power in either No. 2 Southeastern University (Fla.) or No. 3 College of the Ozarks. Those two sides were still in action as of Friday night, jockeying for a spot in Saturday’s championship game, which will tip off at 3 p.m. CT from Keeter Gymnasium.

It will be an early season showdown in the Show Me State. “Both teams are tough challenges,” Olson said. “They’re really fast. I’m interested to see how our kids respond against a really good team.”