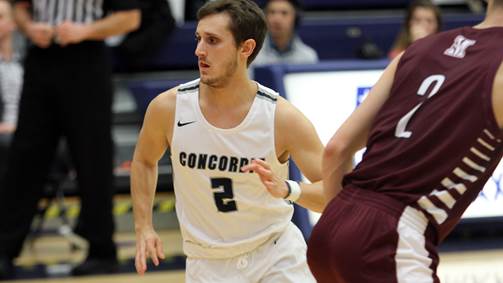 SEWARD, Neb. – A white hot 8-for-10 start from the floor gave the Concordia University men’s basketball team an early double digit advantage over top-ranked Morningside on Wednesday (Jan. 22) night. It looked as if perhaps the Bulldogs just might claim that signature victory they had been seeking. Mustang star Tyler Borchers had other ideas. Morningside suffocated Concordia the rest of the way and left Walz Arena with an 85-72 win.

Head coach Ben Limback’s team will head to CIT at 14-6 overall (7-5 GPAC). The program’s longest win streak in 10 years has ended at seven.

“They’re a good team,” Limback said. “They were the better team tonight. They were way more disciplined. In the second half, defensively we weren’t very disciplined. They made us pay for it. Offensively, if we’re going to do that then we have to make some threes. It just wasn’t our night.”

The undefeated Mustangs (21-0, 13-0 GPAC) upstaged a couple of impressive individual spurts put together by the likes of Brevin Sloup and Sam Scarpelli. Sloup made his first four 3-point tries and piled up 18 points in the first 14 minutes of the game. At one point, the Bulldogs led 21-11. When most of the rest of the team went cold in the second half, Scarpelli heated to volcanic temperatures by pouring in all 21 of his points after the break.

Scarpelli went 5-for-8 from beyond the arc and collected two steals in a stellar 16 minutes of action. Scarpelli was responsible for six of the team’s 12 made baskets in the second half.

Said Limback, “He kept us in the game. He was the one that was shooting it with confidence. He gave us a great spark and we needed that to stay in the game and at least make it interesting. We have guys that are ready to play.”

A 28-9 Morningside run that began in the first half served as a soul crusher. The Mustangs maintained a double-digit lead for the entirety of the last 15 minutes. In the paint, Borchers is a challenging matchup for anyone. He recorded game highs of 23 points and 11 rebounds. As a team, the Mustangs owned a 44-33 rebound advantage. They put the game away by shooting 59.3 percent from the floor in the second half. Five Morningside players reached double figures in scoring, including Alex Borchers (14 points).

Off the bench, Ryan Holt added nine points and six rebounds and shook the rim with an authoritative dunk. Gage Smith led the team with eight rebounds despite foul troubles. Normally effective versus Morningside, Carter Kent went 2-for-10 from the floor and finished with six points.

Concordia had hoped to close the deal and slay the giant. It had come up just shy, 72-71, at Morningside on Dec. 11. The defeat marked the first for the Bulldogs in 2020. They had not lost since their stay in Honolulu, Hawaii, just before Christmas.

The 69th Concordia Invitational Tournament is next on the docket. This year’s event will take place in River Forest, Ill., and will feature the Bulldogs up against Concordia-Ann Arbor (6-14) at 3:15 p.m. CT on Friday. CUNE’s 27 CIT titles are the most in the history of the tournament, which got started in 1951 on the men’s side.