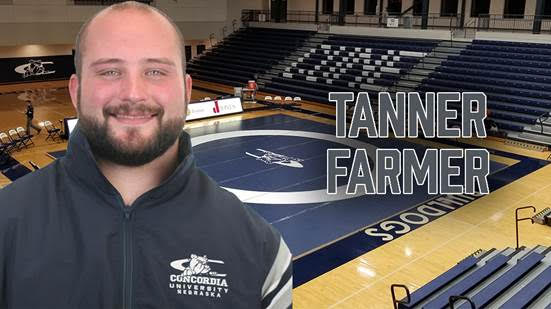 SEWARD, Neb. – Tanner Farmer has made a nice first impression as a Bulldog. A few days after winning a tournament title, Farmer has been named the GPAC/Hauff Mid-America Sports Wrestler of the Week, as announced on Tuesday (Jan. 14). Prior to Christmas, teammate Demitrius Miller garnered the same award on the heels of a dominant victory in the dual win over Midland.

A former starting offensive lineman at the University of Nebraska, Farmer joined head coach Levi Calhoun’s program for this second semester. The native of Highland, Ill., made his Concordia debut on Jan. 9 when he helped the Bulldogs earn a 24-15 dual win over Ottawa University (Kan.). Farmer then went 3-0 at the Hastings College Cusatis Open on his way to capturing the 285-pound title. In the championship match, Farmer topped Nebraska’s David Jensen, a 2019 NCAA Division I national qualifier. Farmer’s week also included two victories over NAIA 20th-ranked Lexington Plummer of Ottawa.

After finishing his career on the gridiron, Farmer appears to have plenty of potential on the mat in what will be his final semester of collegiate competition. As a prep at Highland High School, Farmer won two Illinois state championships.

Farmer and the Bulldogs will return to action this weekend (Jan. 17-18) with the Missouri Valley Invite in Marshall, Mo.