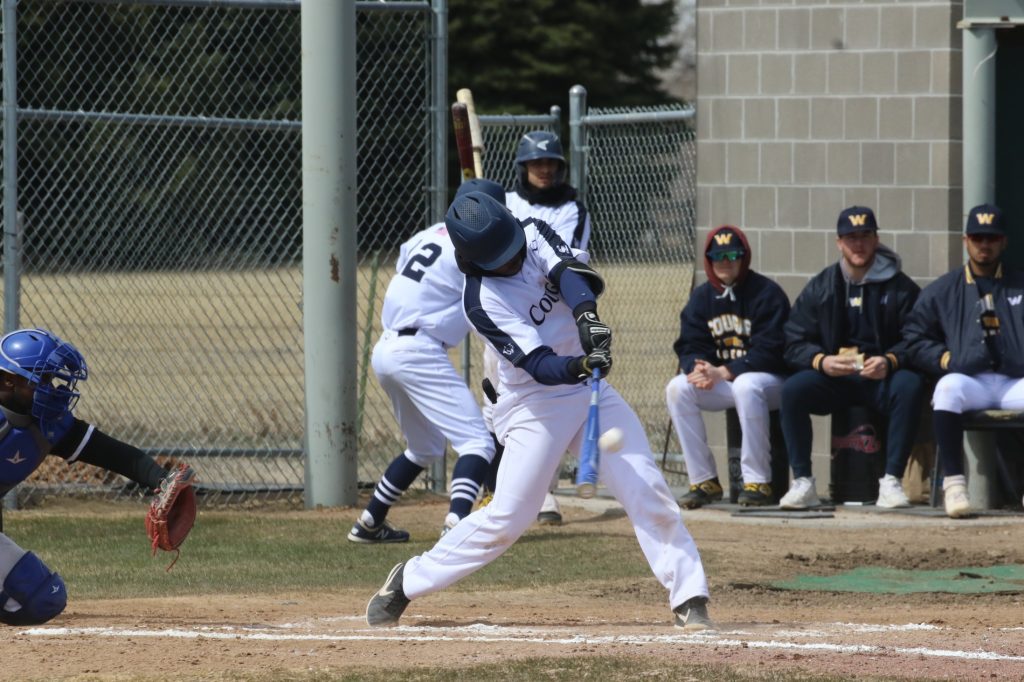 It was a wild Sunday at Cleveland Field between the baseball squads of Western Nebraska Community College and Trinidad State Junior College.

The first game saw 28 runs scored between the two, including a grand slam from each team as the Trojans came back for a 15-13 win. The second contest was just as wile. Trinidad led from start to finish, but WNCC had a seventh-inning rally that came up one run short as the Trojans won the game 11-10.

The first game saw both teams hit the ball hard as each team had 14 hits. Trinidad had three home runs and three doubles. WNCC finished with five home runs and two doubles.

Trinidad started the offense with six runs in the first, including a grand slam from the fourth batter. Trinidad State then added two more runs for a 6-0 lead.

WNCC was just as productive. Luis Alcantara hammered a solo home run to put the Cougars on the board. Then Jayden Orozco walked followed by a single by Matt Womack with two outs. Felton followed with a run-scoring single. Womack scored on a passed ball to make it 6-3 followed by Felton scoring on a wild pitch to make it 6-4.

Trinidad scored one run in the second on two outs, but WNCC came back to added two in the second and single runs in the third and fourth to grab an 8-7 lead.

The second inning saw Alcantara hammer his second home run, this time a 2-run shot to bring the score to 7-6.

WNCC tied the game with a single run in the third as Caleb Coats doubled and scored on a Alcantara 2-out single. The Cougars took the lead in the fourth as Felton had a 2-out home run to make the score 8-7.

Trinidad came back with four runs of their own in the fifth to hold a 11-8 lead. It was short-lived as WNCC plated five runs in the fifth of their own. JT Cafferty led off with a home run. Riley Schanaman followed with a single and Coats walked. Alcantara loaded the bases by reaching on an error. That set up Jordan Rollins, who blasted a grand slam to put the Cougars up 13-11 with no outs.

The Cougars held the lead until the seventh when Trinidad added another four runs to take a 15-13 lead, scoring all four runs with two outs.

WNCC had a chance in the seventh. Orozco and Womack earned free passes to get on base, but a double play ended the game, giving the Trojans the win.

Schanaman also had two hits with a run scored.

The second game saw Trinidad lead from start to finish after scoring four runs in the first and adding two runs each in the second, third, and fourth inning to grab an 10-4 lead.

WNCC scored one run in the first as Rollins had a lead-off home run. The Cougars then plated three runs in the third to cut the lead to 8-4. Quinn McCafferty singles and scores on a Felton double for the first run of the third. Alcantara then walked. Felton scored on a wild pitch for the third run of the game and then Alcantara scored on a Womack 2-out single.

Trinidad answered with two in the fourth, but WNCC answered those two runs with two in the fifth to cut the deficit to 10-6. WNCC’s fifth-inning runs all came with two outs as Felton walked and then Olson hit a towering, no-doubt 2-run home run.

Trinidad led 11-6 going into the seventh and that is where things got interesting. Rollins led off with a double. Rollins scored on a Alcantara double. Olson than made it 11-9 as he hit a 2-run home run. Womack kept the hopes alive with a single. Coats then reached base on a hard-hit grounder. Jack Jones then singled in Womack to make it 11-10. With the tying run on second, WNCC however, couldn’t get the tying or winning run in to fall to the Trojans.

WNCC had 13 hits in the contest with five players getting multiple hits. Olson led the way with two home runs with four RBIs and two runs scored. Rollins, Felton, Womack, and Jones all had two hits. Rollins had a home run and double, while Alcantara and Felton finished with doubles.

WNCC, 13-14, will be back in action Friday and Saturday when they travel to Lamar Community College to face the Lopes in an Empire Conference contest.