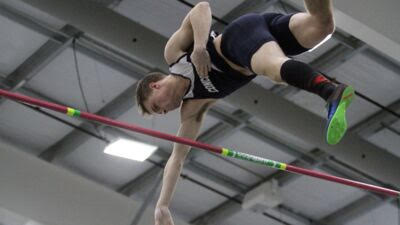 SEWARD, Neb. – The indoor season is now in full swing as the Concordia University Track & Field program hosted its second meet of the 2020-21 campaign. The annual Concordia Polar Dog Invite yielded 12 combined event titles for the Bulldogs, who showcased a standout performer in both the men’s and women’s pole vault competitions. Friday (Jan. 22)’s meet that took place inside the Fieldhouse welcomed foes from GPAC rivals Doane and Hastings.

The Polar Dog marked the third time out this indoor season for Head Coach Matt Beisel’s squads. Concordia entered the meet with 43 total marks that ranked inside of the top 10 of the NAIA national performance lists. Beisel came away pleased with what he saw from the mid-distance and distance runners that he coaches most closely.

“Our athletes crushed it as a whole,” Beisel said. “Most of them ran all-time personal bests or big season bests. We had some good things and also some disappointments in terms of injuries, but I’m really happy for a large number of kids who had a good day. I’m hoping some of those injuries heal quickly. We have to trust God in this whole process. We have kids who are really supporting each other. I was really proud of the team atmosphere.”

In the pole vault, Bulldog junior Zach Bennetts made waves on Friday by turning in a personal best of 15’ 8 ¼” (previous PR was 15’ 1”). He took second place after a close battle with Doane’s Conner Floyd at the top of the heap. Zach Zohner and Cody Williams vaulted 14’ 10 ¼” while also placing in the top four of the event. Only one vaulter in the entire NAIA has gone higher than Bennetts this indoor season.

On the women’s side, Josie Puelz continues to star while taking aim at surpassing the 13-foot barrier. The defending GPAC champion Puelz managed to push her NAIA leading clearance to 12’ 7 ½.” Teammates Amira Cummings (11’ 7 ¾”) and Erin Mapson (11’ 3 ¾”) also vaulted over 11 feet. Four Bulldog women (including Anna Baack) have vaulted over 11’ 3” this indoor season.

Named NAIA National Field Athlete of the Week, senior Morgan De Jong is consistently tossing the weight throw at an elite level. She popped off a throw of 55’ 1 ½” at the Polar Dog and placed third while in close competition with MaKenzie Peters (57’ 2”) of Hastings. De Jong stands out amongst another strong group of throwers.

Said De Jong, a native of Orange City, Iowa, “I think it’s going pretty well so far. It’s been fun to see the progress from the beginning of this year until now. It’s just really exciting to be able to compete since we had such a long break of not being able to. I’m really thankful for the opportunity.”

The Bulldogs also got things accomplished on the track with top sophomore distance runner Kylahn Heritage leading the way. The native of Nampa, Idaho, ran the second leg of a 4×800 meter relay that slashed more than three seconds off a season best by clocking in at 9:44.40. Heritage was joined on the 4×8 by Rylee Haecker, Grace Reiman and Keri Bauer. Heritage (reigning GPAC Track Athlete of the Week) did not stop there. She also placed first in the 5,000 meters with a time of 18:51.89. She outkicked teammate and runner up Sydney Clark (19:20.65).

Said Heritage, “We definitely have high expectations for ourselves. We’ve all been training really hard and are keeping the focus on encouraging each other and on God. We just want to have fun and make memories this season.”

The list of additional Concordia individual winners on the track included Rachel Battershell (400 meters), Bauer (600 meters), Haecker (1,000 meters), Jordan Hilyard (800 meters), Sarah Lewis (60 meter hurdles), Calvin Rohde (800 meters) and Christian Van Cleave (600 meters). After conversions, the times for Bauer (1:41.11), Haecker (3:02.15) and Van Cleave (1:22.32) turned in at the Polar Dog would currently rank in the top 10 of the NAIA (as of Jan. 22). Haecker is a freshman to watch as someone who has posted solid times this season in four separate individual events.

On the men’s side of the 5,000 meters, sophomore Camden Sesna came up just shy of the 16-minute mark and was the runner up. Sesna has the potential to make a big impact while making his way back to full strength after being hobbled towards the end of cross country season. Said Sesna, “It felt great last week running healthy for the first time in almost three or four months. All glory to God. It felt amazing to get back out there after everything we’ve went through with COVID and then getting hurt at the end of cross.”

Other noteworthy efforts included the work of Elle Luehr (42’ 7”) and Abigail Gerber (42’ 3 ¼”) in the shot put. They placed third and fourth, respectively. In the men’s throws, Chris Wren improved his weight throw mark to 54’ 9 ½” (seventh place).

The newest member of the Concordia coaching staff, Ben Hinckfoot, made his first appearance at a home meet as an assistant coach. He works closely with a jumps group that features the likes of Jamey Broman, Emily Loy, Cora Olson and Katie Severt. Olson was the winner out of a small field of triple jumpers (and also placed second in the 200 meters). In the men’s long jump, Jacob Jennings (21’ 10 ¾”) placed second in a hotly contested competition.