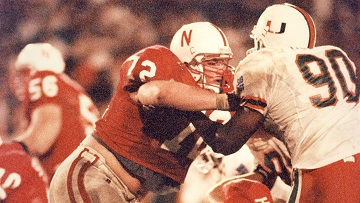 Lincoln — A pair of Nebraska football greats are among 78 players from the Football Bowl Subdivision announced as finalists Tuesday for the College Football Hall of Fame.

Outland Trophy winners Zach Wiegert and Larry Jacobson will represent Nebraska on the 2021 ballot.  Wiegert is making his sixth appearance on the ballot, while Jacobson is a finalist for the third time.

Wiegert was a 1994 unanimous first–team All-American and is one of eight Huskers to win the Outland Trophy. A native of Fremont, Neb., Wiegert helped lead the Huskers to 1994 National Championship after NU played in the 1993 title game. The Huskers averaged 340 rushing yards per game in 1994, and Wiegert led Nebraska with 113 pancake blocks. He even earned one first-place vote for the Heisman, finishing tied for ninth with 27 points. In addition to winning the Outland, he was a finalist for the Lombardi Award, a consensus All-American, the UPI Lineman of the Year and the Touchdown Club of Columbus Offensive Lineman of the Year. His No. 72 jersey was retired before the 1995 season.

Jacobson was a stalwart on Nebraska’s first national title teams in 1970 and 1971. A consensus first-team All-American in 1971, Jacobson won the Outland Trophy as a senior, as he tallied 73 tackles, including 12 tackles for loss, to become the program’s first major award winner. He led the Blackshirts to top-five national rankings in rush defense (85.9, second), total defense (202.9, fifth) and scoring defense (8.2, third) en route to a 13-0 record and a second straight national title. During his three seasons at Nebraska, the Sioux Falls, S.D., product led the Huskers to a 33-2-1 mark with two national titles and three conference crowns. His No. 75 jersey was retired in 1994.

The announcement of the 2021 College Football Hall of Fame Class Presented by ETT will be made in early 2021.

Huskers pick up another verbal commitment