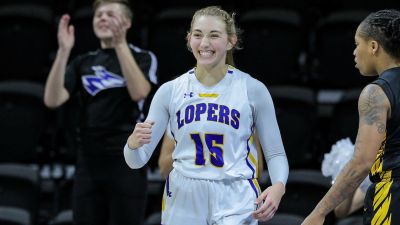 To keep its NCAA Tournament hopes alive and record its’ second-ever MIAA tourney win the Lopers went on 21-9 run encompassing the final 10:41 of the first half. UNK led the rest of the way and by as many as 15 points but MWSU (21-8) trailed by just a 66-62 score with 30 seconds left. While the Griffons forced a turnover they missed the ensuing jumper and UNK sank two free throws to finish the score. Mo West had beaten the Lopers in three previous MIAA tourney games (2019, 2018 and 2016).

“Want to give a ton of credit to Missouri Western. They are a very talented team, they’ve had a great season, are very well coached, have a lot of experience (six seniors and five juniors) and athleticism and we just have a ton of respect for the team that they are,” UNK head coach Carrie Eighmey said. “Both games we played against them this year were nail-biters. We’ve now faced them a lot in the first and second round … one of those things where you start to wonder if you’re ever going to play anyone else other than Missouri Western.”

Backes (Salina, Kan.) recorded her 12th double digit effort of the season by going 6 of 8 from the field (1 of 3) threes and 8 of 10 at the line. She also had four rebounds (two offensive) in only 16 minutes of work.

Also off the bench Iowa freshman forward Madison Dreckman had nine points and two assists in 11 minutes with UNK’s starting five each between six and nine points. The Lopers made 16 of its first 27 field goals (59.2%), were plus 11 on the glass, went 15 of 20 at the line and had a 32-14 advantage in bench points.

“For us we did a lot of good things today. Anytime you have 18 assists you feel like you’ve shared and moved the ball really well. By committee I think were able to create good shots,” Eighmey said. “Both Brooke (Carlson) and Elisa did a great job establishing themselves in the paint. Those paint touches really helped us overall offensively … to be able to move the ball where we wanted to move it and get the shots we wanted.”

Mo West got productive games from posts Corbyn Cunningham (14 points) and Chris Wilson (17 points, six rebounds, and two steals) but the rest of the squad combined for 11 made shots. Senior guard Anastacia Johnson was limited to 17 minutes because of foul trouble and the UNK defense held the Griffs to a 4 of 14 effort from behind the arc.

“Defensively we were good for probably the first three quarters … we took away some of the things they do well,” Eighmey said. “Our guards did a good job of limiting (perimeter) opportunities.”

South Dakota freshman reserve guard Trinity Law beat the first quarter buzzer to give the Lopers a 21-20 lead and then Dreckman scored Kearney’s first five points in the second to make it 26-22. UNK held MWSU scoreless over the final 3:55 with Backes tallying a bucket and her lone three to make it 39-27 at the break.

UNK and E-State split the season series, the Hornets winning 70-49 in Kansas and the Lopers coming out on top in the Health & Sports Center 76-61. Senior guard Jessica Wayne, the MIAA Co-Defensive Player of the Year, missed that contest with injury but is now back in the rotation.

“We watched them yesterday and they are playing really well. Their zone is unique and something not many teams in our conference run,” Eighmey said. “Offensively they have a lot of weapons. Defensively we’ll have to try and limit the opportunities for their big time scorers.”