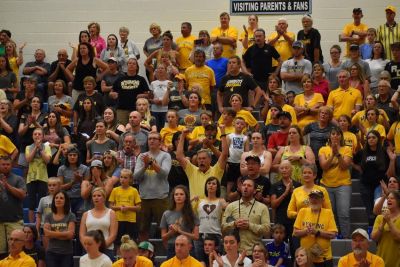 Just over 2,000 fans packed into the gym at Cheyenne East High School to watch this exhibition match between the Lopers, ranked 11th in NCAA Division II, and the Cowgirls, tabbed second in the Mountain West Conference preseason poll. In an event that lasted nearly two hours, temperatures hovered well into the 80’s in the air conditioner-less facility.

Despite the heat and having a week less of practice than their D1 counterparts, UNK was more than equally to the task as they controlled the first two sets and rallied from five down in the third to lead 22-21. While Wyoming rallied in that set, they couldn’t overcome holes of 4-0, 16-12, 20-17 and 22-21 in the fourth. Fittingly, a service ace from Anna Squiers ended the match.

“We’re very encouraged and pleased from what we saw from our team tonight. This was a true road environment and I think we handled it well, playing from ahead and never letting the crowd get too involved,” said UNK head coach Rick Squiers. “This was a rare opportunity for us to play care free … we usually have the target on our backs but we were the underdog for a change.”

Wolfe (Omaha Marian) had the hot hand over the first two sets and finished up with a match-high 14 kills in just 31 attempts (.355 pct.). She also supplied 11 digs, three blocks, two aces and two assists

“She had a very snappy arm, especially in those first two sets. MK has gotten stronger every year and is following a similar grown pattern that Annie went through,” Squiers said.

Anna Squires, from the middle, had five of her 12 kills in the third set. She hit .333, dug up four balls, blocked two more and had one of UNK’s six aces. Next, sister Maddie had an exceptional Loper debut as she handed out 44 assists, had six digs, five kills (.385 pct.), four blocks and three aces. Maddie was a two-time All-American for Bellevue before redshirting last fall.

“Maddie was as good as we could’ve hoped for. She ran our offense extremely well and her will to win helped us down the stretch,” Squiers said.

“Division I volleyball serving has to be strong because it can be hard to stop the other team. Once we got into rhythm passing we were able to run our offense and score some points,” Squiers said.

UNK was out hit .215 to .205 but was plus three in the service game had had just one fewer team block, 9-8, than the much taller Cowgirls.

“It’s an exhibition match, and we played every kid,” said UW head coach Chad Callihan. “It was good to us to get everyone in. We had five kids that have never played in a match for us, so we got them all time. It gives us a ton to see and work on. I was actually somewhat pleased with what we did tonight. We’ll get in the gym and correct some things. When we step on the court in a week, it’ll be nice that we got some of those nerves out, because we looked incredibly nervous for the majority of that match.”

UNK has its annual Blue/White scrimmage this Wednesday, August 28, at 6 p.m.