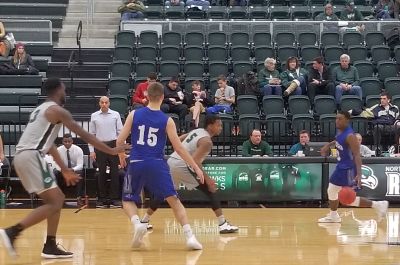 “I just can’t say enough about it. We ask them to be mentally tough and gritty and that’s the definition of it right there. We’re asking them to play smart and together and they are doing it,” said Loper head coach Kevin Lofton. “When we do that we can hang in there with anybody.”

UNK somehow found a way to win despite being down 23-9, having three key players foul out, seeing a potential game-winning three rim out at the end of regulation and missing several late free throws.

“When you look at how the game started they were rolling. We had to find a way to stay in it and we did that. We kept it (the deficit) around nine or 10 and then got to halftime. When we got to halftime I told them they played great and its’ only a nine-point game,” Lofton said. “We just got to be gritty and who we want to be. It’s a process .. you just don’t wake up and do it. You have to go through fire and we did that a little bit today,”

Winchester (DeSoto, Texas) was a big reason why the Lopers overcame all that by tallying a season-high 15 points with eight of that coming in overtime. He nailed a triple to give UNK a 71-70 lead early in OT and then sunk another one with 1:01 left to give the Lopers the lead for good at 79-77.

NSU had a chance to tie things but committed a turnover and Winchester followed with two made free throws. The ‘Hawks came back to make two freebies with UNK missing two chances at the line; they finished 13 of 23 on the day (57%).

After a timeout, NSU had a chance to win it or force more time but redshirt senior guard Kendrick Thompson lost control of the ball driving to the bucket.

“Chase had a look in his eye on the bench. We were running Cedric (Johnson) out there .. he was doing okay but Chase was chomping at the bit to get back in there. He took that one three wide open and missed it but he came back and stuck the next one and it was game one,” Lofton said. “(Assistant coach) Antoine Young and I were debating zone, man, zone, man there at the end. We decided on man but as soon as they were about to inbound I said we should’ve gone zone. And then he drove it in there … we just didn’t want to give up a three.”

Winchester finally sealed things with two free throws. He ended the day 3 of 5 from the floor (2 of 3 threes) and 7 of 7 at the line while also having four dimes and a board in 28 minutes.

Making 30 of 60 shots (10 of 23 threes) and grabbing 30 boards, UNK saw Kansas senior forward Morgan Soucie have a big second half before fouling out. He had 18 points on 8 of 13 (2 of 3 threes) shooting with Belleuve senior forward AJ Jackson logging a team-high 38 minutes. He tallied a team-highs in both points (20) and boards (eight) as he was 9 of 16 from the floor.

Next, Utah Jake Walker netted 14 points thanks to three treys before picking up his fifth foul with Lincoln redshirt junior Sam Morris having one of his top games as a Loper (season-best 13 points, four boards & three assists).

NSU had four starters score in double figures led by Thompson (22) who was 7 of 11 from the field (3 of 4 threes). UNK hosts Washburn and Emporia State next week.