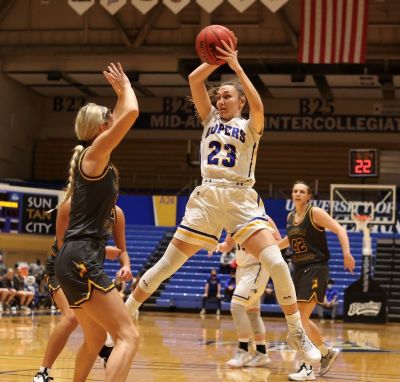 Kearney, Neb. – Junior forward Elisa Backes scored a career-high 30 points to help 12th-ranked Nebraska-Kearney rally from a 12-point second half deficit against Central Oklahoma, 75-68, Thursday at the Health & Sports Center. UNK (13-2) stops a two-game skid and improves to 10-9 all-time against the Bronchos (9-5). UCO had won three in a row and seven of eight. Back in December the Lopers pounded the ‘Chos by a 63-43 score. That was a season-low point total for UCO but they came out firing tonight, shooting 70 percent (7 of 10) in the first quarter and 58 percent (7 of 12) in the second. Six-three center Kelsey Johnson (20.8 points and 9.6 rebounds per game) picked up her third foul early in the second so it was her teammates that did the most damage. Several of those made shots were banked in or runners in the lane. “Early in the game I didn’t think our defense was terrible. They had kids that we necessarily didn’t peg as shooters making tough shots,” Loper head coach Carrie Eighmey said. “We did a really good job on their post player (Johnson) who we were really concerned about. But we let everyone else score a little bit more than we would’ve liked.”

Ahead 19-15 after the first period and 41-32 at the break, UCO sunk its first three shots in the second half to make 48-36. While that was the ‘Chos biggest lead of the night, they ran into UNK’s nationally-ranked defense the rest of the way. UNK held UCO to 6 of 23 shooting (26 percent) over the final 18 minutes. “In the second half we did a better job of playing more true to everyone. Didn’t double as much and we were able to slow down some of those other players that hurt us in the first half,” Eighmey said. Backes (Salina, Kan.) had 23 in the second half with one of her three triples starting the comeback. She then followed a ‘Chos turnover with a shot in the lane, capping a 16-5 run that made it 53-52 by the 2:42 mark. A minute later Backes sunk a free throw to tie things at 53, the first time since early in the contest UNK was even with UCO. The Lopers never trailed in the final period as the ‘Chos were called for a travel right away and Backes followed with a bucket. The game was tied at 59 with 6:52 to play but a 5-0 spurt put things away. Crofton senior Kelsey Sanger hit a shot in the lane and then Elkhorn junior post Brooke Carlson converted a three-point play. UCO did get the deficit down to one possession, 67-64, with 2:02 left but Backes did it again, sinking her final three from the top of the key 16 seconds later. She ended 10 of 15 (3 of 6 threes) from the field and 7 of 9 at the line. This is the 45th game of 30 or more points in Loper history and just the sixth in an MIAA game. “Offensively we did a good job all night but especially in the second half. We took care of the ball, valued possessions and when we got to the free throw line we made more of them (13 of 18) than we did in the first half (3 of 8),” Eighmey said.

Tallying those 30 points in just 26 minutes, Backes also had five rebounds, and three steals. Next, Carlson had 17 on 7 of 13 shooting with South Dakota junior Klaire Kirsch at seven points, seven rebounds, five assists and two thefts. As a team UNK had 44 points in the paint and tallied 17 points off 16 UCO turnovers. “Elisa did a really good job taking advantage of the opportunities she had. It’s something she’s continued to get better at over the course of her career and especially in the last month,” Eighmey said. “She’s able to do several things … she can hit threes, is good off the bounce, can score in the post. Elisa is a tough matchup for other teams.” Ten different ‘Chos scored led by starting guards Avery Allen (14) and Brooke Rayner (10). Johnson ended up with six rebounds, four points and an assist in 16 minutes. UNK hosts Newman on Saturday afternoon. The Jets (3-12) fell at Fort Hays State tonight, 68-50.

Kearney, Neb. – Central Oklahoma had six score in double figures and hit a couple of late threes to hold off Nebraska-Kearney, 87-79, Thursday night at the Health & Center. One of the hottest teams in the MIAA at the moment, UCO (7-5) has won six of seven and improves to 16-5 all-time vs. UNK (5-9). In a frantically paced game that saw several big dunks, missed dunks, 65 three-point attempts, two new UNK school records, and a technical foul, the Lopers climbed the mountain several times but couldn’t get to the top. Redshirt sophomore guard Myles Arnold (Fontana, Calif.) tallied a career-best 35 points, thanks to a school-record 18 three-point attempts, but UNK couldn’t erase a 19-point second half hole. “A lot of times it takes a semester for a transfer to get their feet wet and figure out the style of play and the level of play,” UNK head coach Kevin Lofton said. “It seems Myles has started to get a feel for it … we’re doing all we can to instill the confidence in him. He needs to continue to be aggressive.” Going 16 of 51 from behind the three-point line, Kearney fell behind 26-10 midway through the first half. But six treys, including four by Arnold, were part of a 22-8 run that made it a one possession game with 3:41 left in the half.

However, UCO responded with a 13-7 spurt to regain the momentum and lead by eight at the break. “We rebounded well when we got them to miss. Maybe sped them up a little bit because I think they wanted to slow it down at a certain point,” Lofton said. “They got it going there from the middle of the first half and into the second. They had a couple of guys hitting that you didn’t think would knock them down. Hats off to them … six of seven with the only loss to Northwest Missouri. They are playing pretty well.” The ‘Chos, who finished 8 of 15 from long distance, remained on fire to start the second half as they opened up a 60-41 lead by the 16:12 mark. UNK countered once more, getting the deficit to 10 by the 10-minute mark and then to two three minutes later. UCO turned a Loper turnover into a fast break layup and a four-point lead and then a three from Cam Givens made it 78-71 with 3:32 left. Just prior Arnold sunk his eighth and final three of the night.

A three from the left corner by junior Kiwi Matt Brien made it a two-point game once again, 78-76, but UCO followed with another three, this time a corner shot by Jaden Wells. UNK didn’t get closer than six the rest of the way. “I’m proud of our guys fight. I think they really just didn’t give up on it,” Lofton said. “We started the second half down eight and then they spurted. It looked like, wow, this is really, really going to get ugly. But our guys hung in there … at times we had stretches of good man-to-man defense. That got us in transition and we stuck a few threes.”

Arnold finished 13 of 26 from the floor and also had eight boards, four steals and three assists over 36 minutes. This is the 13th game of at least 35 points in UNK’s MIAA era (since 2011-12). Mike Hancock had held the record for most triple tries in a game (16, vs. Fort Hays State, Feb. 1998). Next, Utah senior Jake Walker hit four long range shots to score 14 with Brien at 11 points, five assists and five caroms. UNK made 14 of its 23 two-point shots (62 percent) and tallied 25 points off 16 ‘Chos miscues. The previous team three-point record of 40 was set in a November 2006 loss at Augustana. Finally, the 16 makes are one off the school record (2010 at Metro State and 2004 vs. New Mexico Highlands). “We knew going in from a physicality standpoint we were behind the eight ball. They have a lot more size and athleticism,” Lofton said. “We just had to keep competing and did what we could to keep the heat on.” For UCO, Washington State transfer Isaiah Wade had a team-best 18 points with Givens at 17 and reserve Shemar Smith providing 14 points and seven boards. UCO shot 57 percent (31 of 54) from the field, sunk 17 of 22 free throws and was plus nine on the glass. The Newman Jets (2-12) come to down Saturday evening. They fell tonight at Fort Hays State, 69-64.