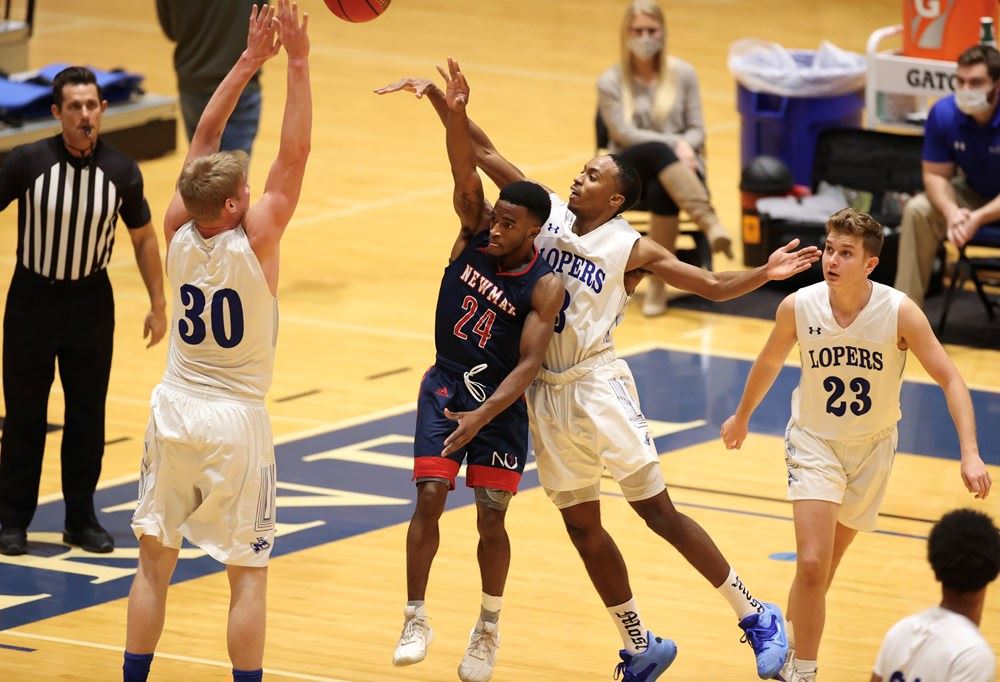 Shooting 58 percent in the first half and going 20 of 23 at the line on the day, UNK led for 35 minutes and by as many as 14 points in the second half. However, NU made six threes after the break and had four score in double figures to more than hang around.

Walker (Centerville, Utah) made two freebies with 45 seconds left to make it a 64-59 score. Newman missed a three 18 seconds later but a tap out led to a three from the top of the key by reserve Brandon Bunn (team-best 20 points).

“We get the stop but they get the (offensive rebound). I told them in the timeout ‘Look, if we get the stop you got to rebound it.’ Because its’ usually the rebound that kills you. They throw it out to a guy (Bunn) who spotted up,” UNK head coach Kevin Lofton said.

The Lopers again got the ball to Walker who came in shooting 83.3% from the line. He made two more but NU’s Ian Lee sunk a three from the right corner with eight seconds left. Diminutive Tyjil Hereford, listed at 5-7 but more like 5-5, was guarding Walker on the in-bounds play and managed to deflect the ball. Teammate David Javorsky picked it up and was going in for a layup where Walker managed to wall up. The shot in the lane missed with Bellevue lefty Cedric Johnson grabbing the rebound with four seconds left. Johnson and Walker hit four freebies to finish the scoring.

“What didn’t happen in the second half? We did a good job of coming out and starting the half … got a lead but all of sudden they come roaring back. They hit a couple of threes and even banked one it,” Lofton said. “At the end we didn’t have a timeout to burn so we had to get it in on our own. They made a play on it … we made the mistake of in-bounding underneath our basket. But we didn’t panic and walled up at the rim.”

UNK shot just 32% (7 of 22) in the second half and was minus seven on the glass but tallied 17 points off 15 Jet turnovers. Walker reached his tally thanks to an 11 of 11 effort at the line and 5 of 6 three-point shooting. Next, Utah junior Darrian Nebeker (14) and Alliance senior Austin Luger (12) scored in double figures. Nebeker made 5 of 7 shots to have one of his best games as a Loper. Finally, Johnson had eight rebounds, five assists, four points, and two steals.

“If you go back and look at our wins Jake usually has a really good game. He had a monster second half (20 points),” Lofton said. “We think Darrian is a really good four for us. When he attacks the rim and doesn’t settle like he did today good things happen.”

Kearney, Neb. – Junior post Brooke Carlson had a double double and No. 12 Nebraska-Kearney went six for six from the three-point in the fourth quarter to pull away from Newman, 60-40, Saturday afternoon at the Health & Sports Center.

It was anything but easy against a methodical NU squad that uses a tough zone defense throughout. Allowing just 63 points on the year, the Jets led 16-13 after the first quarter and hung around until a 15-0 game-ending run by the Lopers. That spurt was fueled by three triples and four made free throws as NU head coach Darin Spence was dinged with two technical fouls.

Carlson (Elkhorn) had a team-high 11 points thanks to four buckets and three free throws while tying her career-high in rebounds (13). UNK started 3 of 19 from behind the arc but didn’t miss over the final 7:52.

“We finally were able to hit some shots. I thought we took and had some really good ones early. They were on-line but maybe front of the rim, back of the rim. If a few of those goes down maybe it’s a different game,” UNK head coach Carrie Eighmey said. “They did a good job of not allowing us high post catches. Anytime in a 2-3 zone that’s the area (high post) you want to get the ball to. They also were double teaming our post touches.”

Newman had a golden chance to cut into a 39-36 deficit with six minutes to go but missed three shots in the paint and then went one of two at the line. Point guard Haley Simental (Pueblo, Colo.) stuck a three from the left wing followed by triple from junior forward Elisa Backes (Salina, Kan.). Suddenly the Lopers had its biggest lead of the night, 45-37, and never looked back.

“We turned the ball over 16 times. Anytime you’re able to defend in the half-court you don’t want to give them opportunities in transition. That one late (39-36) … it was great effort on our part not to give up an easy (layup) there. That says a lot about our kids and our mindset defensively.”

“It’s the same story … we defended well enough to keep ourselves in the game even when we weren’t shooting. You hold a team to 40 points and you feel like you have a chance to win,” Eighmey said.