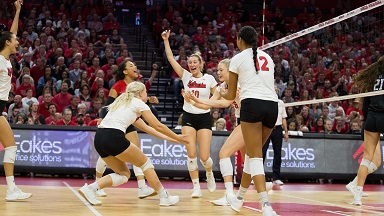 The sixth-ranked Huskers, making their 38th straight NCAA Tournament appearance, will open the tournament on Friday at 7 p.m. against the Ball State Cardinals, champions of the Mid-American Conference. The 4:30 p.m. match will feature the Missouri Tigers of the SEC and the Northern Iowa Panthers of the Missouri Valley Conference. Friday’s winners will meet on Saturday, Dec. 7 at 7 p.m. in the NCAA second round.

Nebraska is in No. 4 Wisconsin’s region along with No. 12 national seed Hawaii and No. 13 Texas A&M. The Huskers would only have an opportunity to host an NCAA regional if they advance past the opening two rounds and Wisconsin gets upset in the first or second round.