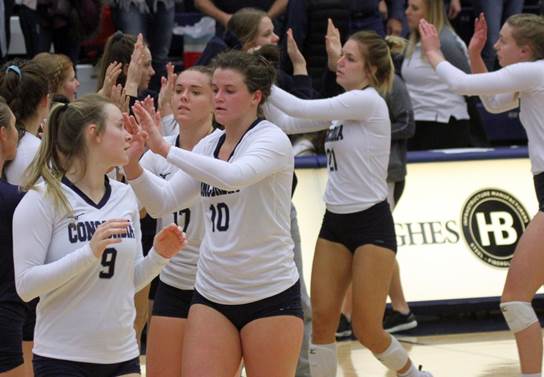 SEWARD, Neb. – Head coach Ben Boldt called Sunday’s matinee a “grind-out, earn everything type match” after his squad put the finishing touches on its latest victory. The 17th-ranked Concordia University volleyball team effectively rebounded from Thursday’s five-set defeat at the hands of No. 8 Jamestown and toppled Dakota Wesleyan, 25-21, 19-25, 25-20, 25-19, on senior day. The Bulldogs moved to 10-2 at home.

Concordia entered the day knowing it needed one victory to clinch third place and a GPAC tournament quarterfinal home match. The Bulldogs have reaped that reward while pushing their GPAC record to 11-4 (22-4 overall).

“I don’t know if the tempo of the match was exactly what we wanted,” Boldt said. “We had to earn our points tonight and we did. Hitting .236 is not bad. Dakota Wesleyan didn’t give us anything. We had to earn everything that we got.”

The opening set illustrated Boldt’s point. Concordia needed 20 kills to gain the upper hand and set the tone for the day. The Tigers gave the Bulldogs some fits in the second set with their blocking, but some slight adjustments did the trick. Freshman middle blocker Kalee Wiltfong went off for a career high 19 kills on 40 swings (.350 hitting percentage). She became the go-to hitter, but three teammates also put down at least 10 kills: Camryn Opfer (15), Kara Stark (11) and Emmie Noyd (10).

Junior setter Tara Callahan racked up 56 assists while playing the role of maestro in the balanced attack. Concordia notched at least 12 kills in each set (64 total) in overpowering a Dakota Wesleyan squad that was hunting for that elusive signature conference win.

“It was just about us understanding that they’re a really scrappy team,” Noyd said. “They’re going to get up balls that usually teams don’t. You have to have the mentality as a front row to keep going and keep swinging hard. The plays will come.”

The Tiger upset bid gained some traction in the second set when the likes of Emily Brunsing and Callie Heath made life difficult on the Bulldog attackers. That set concluded with Brunsing blocking Noyd to knot the match, 1-1. Dakota Wesleyan (20-11, 4-11 GPAC) did make a late push in the third set, but Wiltfong and company had figured out how to slice up the Tigers’ defensive alignments.

Said Boldt, “In that second set they were blocking us pretty well. That’s when we made our adjustment. We were able to flip our middles and have Wiltfong go behind a little bit more to open up their block and make them defend us pin to pin.”

Blocks were even at 8-8 by day’s end. Star Tiger outside hitter Rebecca Frick topped her side with 19 kills (.190 hitting percentage). In terms of percentage, Brunsing (11 kills, .292) was Dakota Wesleyan’s most efficient hitter.

One of the seven seniors honored prior to first serve, Kaylie Dengel paced the Bulldogs with 19 digs. Callahan and Noyd were both in on four blocks while senior Kaci Hohenthaner and sophomore Tristin Mason collected two aces apiece. Other seniors not already mentioned were Jenna Eller, Katie Funk, Harlie Himmelberg and Raymi Marquardt.

The Bulldogs will wrap up the regular season on Wednesday with a trip to Orange City, Iowa, for a 7:30 p.m. CT first serve at No. 1 Northwestern (27-0, 15-0 GPAC). The Red Raiders, who have already clinched the GPAC regular-season title, will be aiming to complete an unbeaten regular season. Northwestern has had three matches go to a fifth set in 2019.