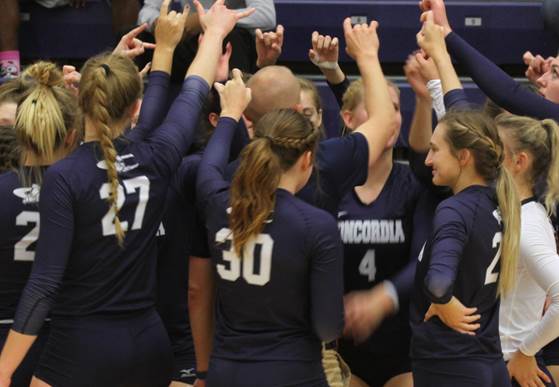 BALDWIN CITY, Kan. – The weekend spent in Baldwin City, Kan., was about taking care of business for the Concordia University volleyball team. It’s been a while since members of the program have walked and talked with the type of confidence they now exude. In action at the Baker Invitational on Saturday (Sept. 7), the Bulldogs toppled Haskell Indian Nations University (Kan.), 25-16, 25-9, 25-22, and then event host Baker, 25-17, 25-18, 25-17.

Head coach Ben Boldt’s squad is now 11-0, a record that nearly mirrors the 12-0 mark that the 2018 team jumped out to. But this undefeated run feels different.

“I think last year with a similar record the feeling was, ‘Are we really this good?’” Boldt said. “It was more of a sense of a question. I think there’s more confidence in this team. They’re hungry and yet they’re still humble. It’s just a different feel and a different quality to this team. They’re not letting anything get to their heads. It’s one day at a time and it’s about who shows up and comes to work.”

Concordia has reached a point where it can overmatch certain opponents in obvious ways. It helps that the Bulldogs can combine productive veterans with talented youthful contributors. This was a monster weekend for one of those rookies in Kalee Wiltfong, a middle blocker who stands 5-foot-10 (maybe on her tippy toes). Over the three matches at the Baker Invite, Wiltfong slugged 34 combined kills and hit better than .300 in each outing. She also was in on seven blocks on Saturday.

Efficiency across the board led to Concordia owning the statistical battle again on Saturday. The Bulldogs outhit Haskell, .290 to .099, and then out-attacked Baker, .327 to .182. As Boldt would point out, it’s not just about who finishes the point, it’s often about who starts it. Frequently that would be Marissa Hoerman, who notched 35 digs over the latest two wins. At setter, Tara Callahan piled up 75 assists on the day.

“It was good for our team to get tested for our ability to show up after a big win,” said Boldt in referencing the team’s victory over Hastings on Wednesday. “We were able to string good performances together. That’s the big thing we’re taking away. Our mental focus towards each match continues to get refined. We did a really good job, especially in the Baker match of staying focused and preparing to play our best.”

For the day, Emmie Noyd pounded 24 kills and hit .548. Camryn Opfer smashed 17 more kills and hit .441. Erica Heinzerling added 11 kills in the victory over Haskell. Finally, Kara Stark returned to the lineup in the afternoon match and contributed eight kills. Kaylie Dengel and Hoermann chipped in with four aces apiece on the day.

With the exception of a Sept. 21 match at Peru State College, it will be GPAC play from here on out for the Bulldogs. Up next is a short journey to Omaha for a matchup with College of Saint Mary (15-3, 1-0 GPAC) at 7:30 p.m. CT on Wednesday. Concordia opened up conference action this past Wednesday by knocking off No. 14 Hastings inside Walz Arena.