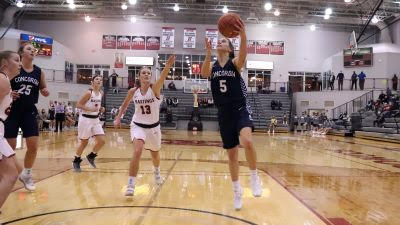 HASTINGS, Neb. – Two programs that battled closely for last season’s GPAC regular season and postseason titles renewed their rivalry on Wednesday (Dec. 2) inside Lynn Farrell Arena. The result was a tense affair between two very different squads than the ones that met back in March. The 11th-ranked Concordia University Women’s Basketball team closed the game on a 9-0 run and pulled a 73-66 victory out of the fire in Hastings.

This was easily the most nerve-racking of the six-straight wins for 15th-year Head Coach Drew Olson’s squad. The Bulldogs (6-3, 5-1 GPAC) had been off since their 99-47 triumph at College of Saint Mary on Nov. 24.

“We knew it was going to be a great battle,” Olson said. “Hastings is so good defensively. They’re a gritty team, but I really liked how we fought back. We just found ways to win. It was awesome to see our team grow in that way.”

The win streak appeared to be in jeopardy in the final minute of Wednesday’s white-knuckler. That’s when freshman Taysha Rushton emerged with a driving three-point play that edged Concordia in front, 67-66. Averie Lambrecht followed with one of the game’s key efforts when she stole the ball and took it in for two. A series of empty Bronco possessions and four-straight free throws put the game on ice. Hastings went without a field goal in the final 2:27 of game time.

After taking a backseat from a scoring perspective in recent outings, star Bulldog Taylor Cockerill ramped things up with a game high 18 points (to go with seven rebounds and two steals) against a solid, mostly man-to-man Hastings defense. Cockerill again showed an ability to get into the lane on a consistent basis. Other double-figure scorers for the victors included Rushton (13), Rebecca Higgins (12) and Mackenzie Koepke (10).

“I thought she had a really good attack early on,” Olson said of Cockerill. “They did a nice job defensively against her in the second half. Part of that was our rhythm offensively just wasn’t very good, but she had a great game and we needed it from her … We had a lot of players step up and make big plays for us to win that game.”

Concordia led by as many as 10 points in the first half, but trailed for a good portion of the fourth quarter. The Broncos are showing a lot of growth of their own behind veteran guards Taylor Beacom and Kaitlyn Schmit (14 points apiece). Hastings (2-3, 2-2 GPAC) was flustered into 25 turnovers, but it also forced 22 by the Bulldogs. The two teams were almost dead even in field goal percentage (41.1 to 41.0 in Hastings’ favor).

In winning at Hastings, this year’s squad did something the 2019-20 team (32-2 overall) was unable to do. However, the Bulldogs have had their way with the Broncos in recent years, taking 11 of the last 12 series matchups.

A longer conference road trip awaits on Saturday when the Bulldogs will head to Sioux City, Iowa, to take on Briar Cliff (6-1, 4-1 GPAC). Tipoff from the Newman Flanagan Center is set for 2 p.m. CT. The Chargers suffered their first loss of the season in a 59-50 defeat at the hands of Northwestern on Wednesday.