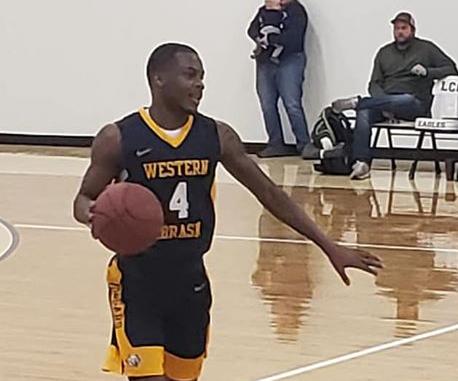 The Cougars led from start to finish in claiming their sixth straight win to improve to 10-5 on the season.

Teddy Allen led the Cougars in scoring with 24 points, including three 3-pointers and going 5 of 5 from the charity stripe.

WNCC also received a 17-point performance from Kenny Strawbridge while James Felton and Tayler Johnson each had 15 points. It was Johnson’s first game as a Cougar as the Division I University of Northern Iowa football recruit finished with eight points, six assists, and three steals.

WNCC went up 8-2 early and led 19-12 before going on its longest scoring run in the first half of eight points behind two Jarred Rosser dunks and four points from James Felton to lead 25-12. LCCC came back to cut the lead to single digits at 34-25, but the Cougars went on a 8-4 run to lead 42-29 at halftime.

The Cougars came out in the second half on fire, going on a 26-6 run to run to a 68-35 lead. The run included a 17-0 run that saw Allen bury two treys and Johnson getting an old-fashioned 3-point play.

WNCC put together mini runs after that to roll to the 93-56 win.

More impressively was the Cougars defensive intensity, where they held LCCC to 35 percent shooting and just 11 percent from beyond the arc (2 of 19). The Golden Eagles were just 6 of 9 from the free throw line.

WNCC held a 40-37 rebounding advantage over LCCC. Allen, Johnson, and Strawbridge all had eight boards.

The Cougars finished with 18 assists, led by Johnson and Allen each with six.

Besides Allen, Johnson, Felton, and Strawbridge in double figures, Rousser chipped in 10 points.

WNCC, 10-5, will be back in action next Friday when they open South Sub-region play at Northeastern Junior College in a women’s and men’s doubleheader. It will be the Cougar women’s first game after the semester break.

Huskers travel to No. 20 Terps Thursday