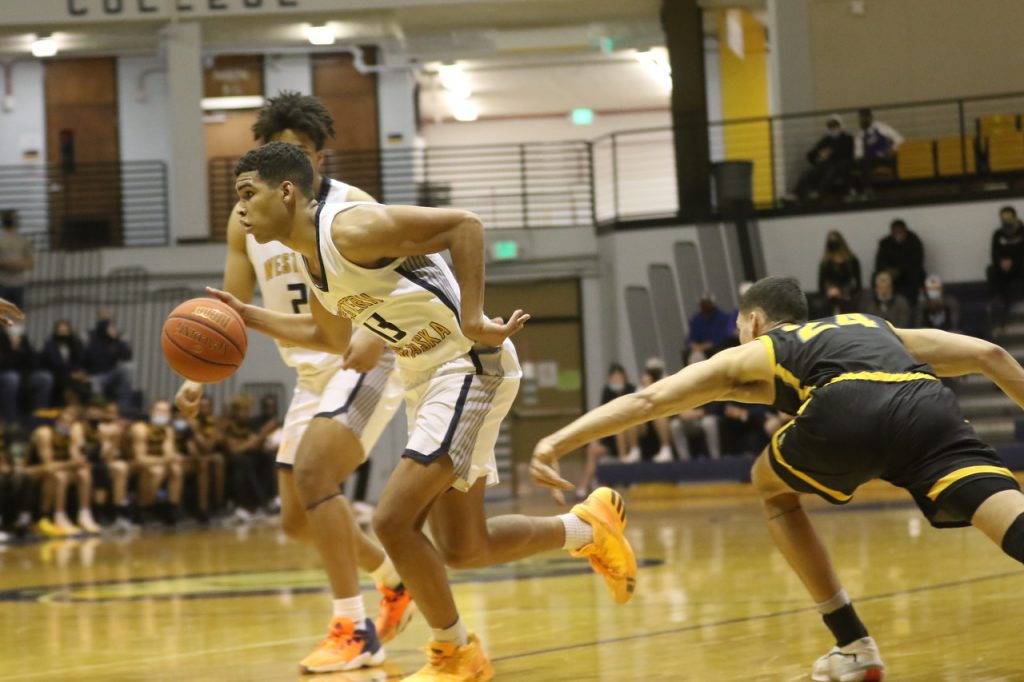 In the end, the Golden Eagles hung on to down the Cougars 109-108 in overtime Tuesday night in Cheyenne, Wyoming, to earn the win in a thrilling game.

The contest saw both teams shoot the ball well. WNCC was 43 percent from the field and 44 percent from the 3-point arc. The Cougars buried 15 treys, 12 of which came in the second half and overtime.

LCCC was 50 percent from the field and 42 percent from behind the arc. The Golden Eagles hit 14 threes, nine of which came in the second half.

The first half started out with LCCC grabbing a 10-4 lead before WNCC came back to grab a 13-12 lead on a Tyler Mack bucket. The lead was short-lived with LCCC coming back to grab a 29-19 lead.

WNCC heated up as they outscored the Golden Eagles 12-2 to tie the game at 31. Both teams exchanged buckets. With under a minute to play, WNCC held a 44-41 lead only to watch LCCC come back to slice the lead to 44-43. Mack closed out the half with a trey that gave the Cougars a 47-43 halftime lead.

WNCC kept fighting, hitting big shots including Mack nailing a trey to give the Cougars an 89-88 lead. Seconds later, Agwa Nywesh hit a trey for a 92-90 lead. LCC came back and took a 95-92 lead with 35 seconds to play. LCCC had a chance to ice the game with 8.6 seconds, but missed the front end of a one-and-one. WNCC called a timeout with 7.6 seconds and then with .2 seconds remaining, Brown hit a triple from the corner to tie the game at 95, sending it into overtime.

WNCC scored the first two buckets of the extra period with field goals from Them Koang and Thompson. It was short-lived as LCCC came back to take a 107-101 lead. The Cougars didn’t quit as Koang hit a bucket and then Brown hit a trey to slice the lead to 107-106. Nywesh then put the Cougars up 108-107 with 40 seconds to play.

LCCC came back to go ahead 109-108. WNCC. Once again, LCCC missed free throws with 11.2 seconds to play, setting up a last second shot for the Cougars to win the game. But, as time expired a 3-pointer came up short, giving the Golden Eagles the win.

WNCC was led by Thompson with a double-double of 30 points and 14 rebounds. Thompson sank two treys.

WNCC, 2-2, will have little time to relax as they will be back on the road for a contest with Casper College Wednesday night.