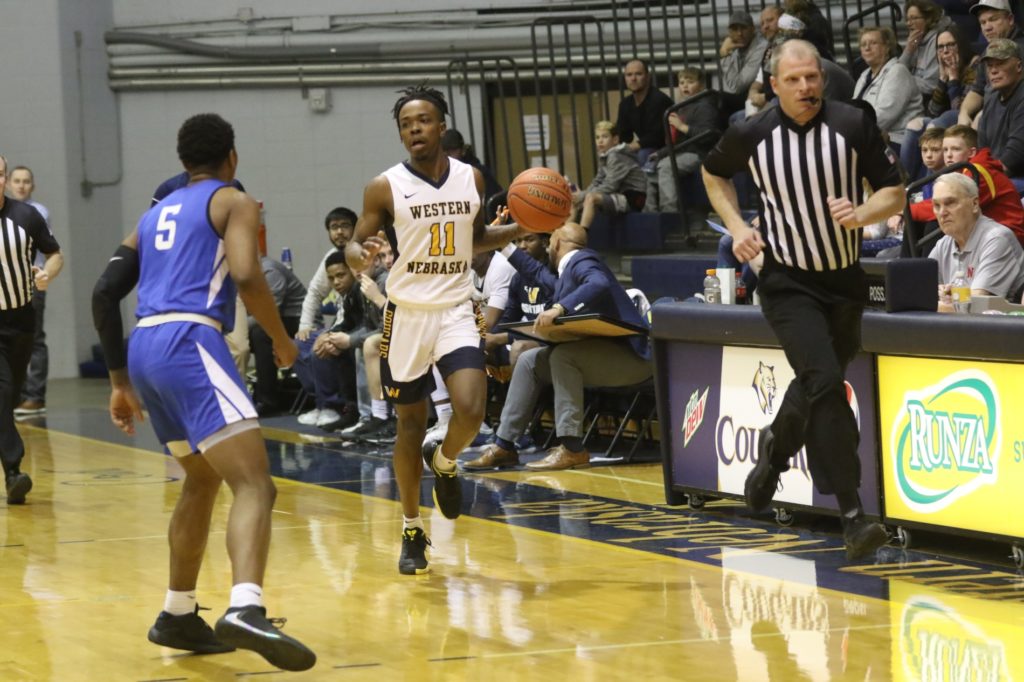 WNCC head coach Cory Fehringer said tonight they had balanced scoring and they won the rebounding battle, which was huge.

“Teams have been shooting really well against us and we are not very deep right now with a lot of bodies so we have to choose who we are going to take away,” he said. “Tonight, we tried to limit paint touches and rebounding and we were plus five on the glass. We are going to give up threes. Other team’s mentality is they want to get a win over Western Nebraska. Kids come in here with a lot of confidence.”

WNCC won the rebounding battle 38-33 and they also won the dunk battle, hammering home nine dunks on the night.

WNCC trailed just once in the contest at 3-2. The Cougars then went on a 9-0 run behind five points from Kalen Williams and a rim-jarring dunk by Kenny Strawbridge for an 11-3 lead. Lamar came back to tie the game at 19, but Williams buried a trey and then Tayler Johnson had a steal and dunk for a 24-19 lead.

Lamar cut the lead to five points early in the second half at 49-44, but WNCC went on a 21-7 run behind back-to-back dunks from Jarred Rosser and Elie Cadet, and back-to-back treys from Jordan Smith and Teddy Allen for a 70-51 lead.

Besides Allen, Strawbridge finished with 21 points while Rosser had 15 points. Williams and Cadet each tallied 23 points, while Johnson was one point shy of double figures with nine points. Smith finished with five points, while Conner McCracken banked in a three at the shot-clock buzzer for his three points.

WNCC, 12-7 overall and 2-2 in sub-region play, will be back in action next Tuesday when they face Trinidad State Junior College before hosting 10th ranked Otero Junior College on Friday, Jan. 31.