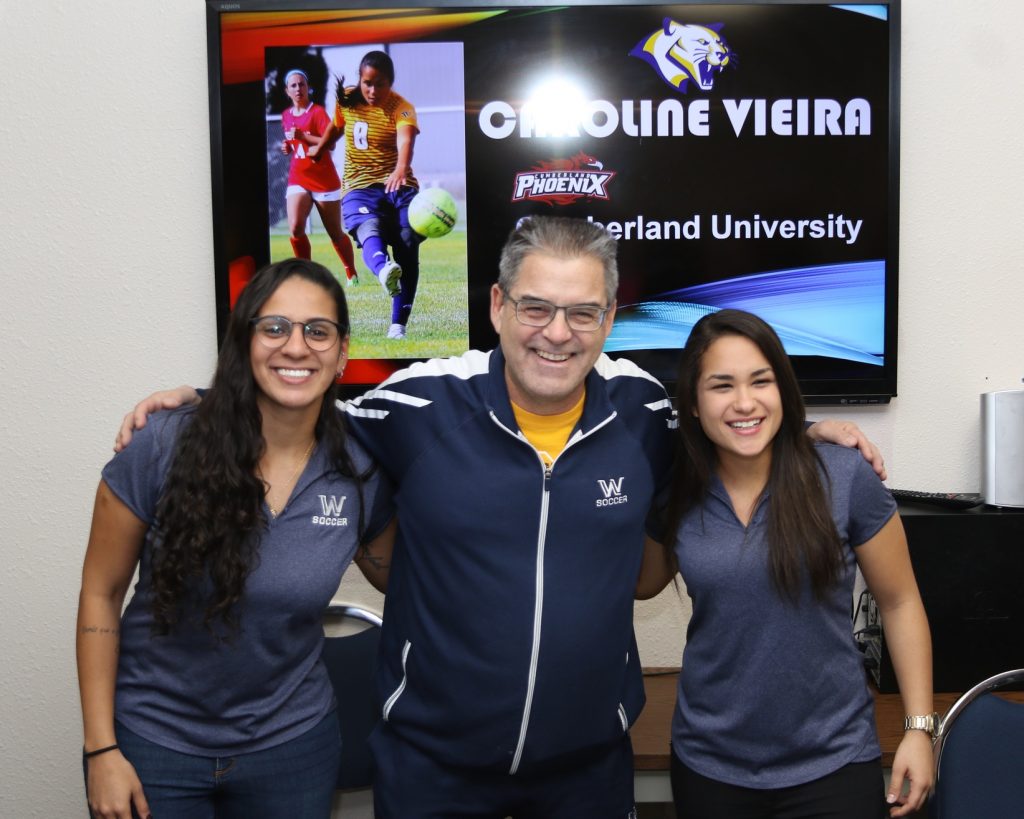 When Rafaela Passos came to Western Nebraska Community College three years ago, she had a vision to keep playing soccer.

An ankle injury her freshman year made her stay in Scottsbluff a little longer. But, at the same time, she brought in another Brazilian, Caroline Vieira, and now both will be continuing their playing careers at the four-year level.

While Passos and Vieira played with each other the last two years for the Cougars, they will be on opposite side of the fields when they head to their new schools, which are in the same NAIA conference in Tennessee.

Passos will be attending Bethel University while Vieira is headed to Cumberland University.

Both are excited that they will be continuing their playing days in the United States while getting an education.

For Vieira, she will be going to Cumberland and play against her Cougar teammate. Bethel and Cumberland are part of the Southern States Athletic Conference in NAIA. Last fall, the two teams tied 0-0 in double overtime.

“I am going to Cumberland University in Tennessee and it is also a great program,” she said. “They offered me a great opportunity in playing and going on to get my Masters.”
For Vieira, playing at the next level is something that makes her family proud.

“It makes my dream come true,” she said. “It makes my family and friends happy and proud of me.”

Vieira not only has been instrumental on the soccer pitch, but her work in the classroom has been top notch. Vieira was an NJCAA academic all-American as a freshman and was on the President’s list at WNCC last semester with a 4.0 GPA. She said she has plenty of support to help her.

“I try so hard to everyday do my best and somedays it is hard but I have my friend’s support which made everything different,” she said. “I feel like my success in the class and as a player is all about my work, my friends, and also God that has helped me.”

Passos had a different trek at WNCC. Passos injured her ankle in the first day of practice three years ago and had to redshirt that year. That injury helped Passos grow as a player and person while at WNCC.

“It has been really amazing and I am really grateful for everything that happened with me here, even the bad things, because I grew up a lot with all that,” she said. “I got injured in my first week here and that was a real bad time but it helped me with my growth and growing as a person and athlete.”

Passos also helped bring in more soccer players from Brazil and Vieira was one of them. Now, after playing together for two seasons, they will be playing against each other.

“I helped coach recruit a lot of the Brazilians and Carol was one of them I helped get here,” Passos said. “Now we are going to be rivals and play against each other.”

Vieira said it won’t be a problem playing against her next year because her new team will win.

“It won’t be a challenge,” she said. “We have been playing with each other since Brazil and it will be hard seeing her playing on another team. It will be challenging but really cool. I am really grateful for her and wish her team luck, but my team will win.”

The two will find it hard to leave WNCC in May because of all the friendships they have made in Scottsbluff.

“It will be hard leaving here because this is where everything started and I grew up a lot here,” Passos said. “Plus, I came from Brazil and here is where I have learned everything I know now. I can’t talk more about it because I will cry.

For Vieira, she, too, is a different person after coming to WNCC.

“I met a lot of new fiends and they helped me a lot in the whole process. I feel like I am a different women since I came here,” she said. “It is going to be real hard because you got used to everything here with friends and relationships. When I was searching for a school, coach was the first one to talk to me. Everything was good here even with the small town, which was a part of my life. I am leaving a part of my life here. That is sad sometimes.

“I am thankful to everyone. Coach for giving me the opportunity and the people that always support me or work with me in my daily things, We will always be together because we are friends and together for life.”