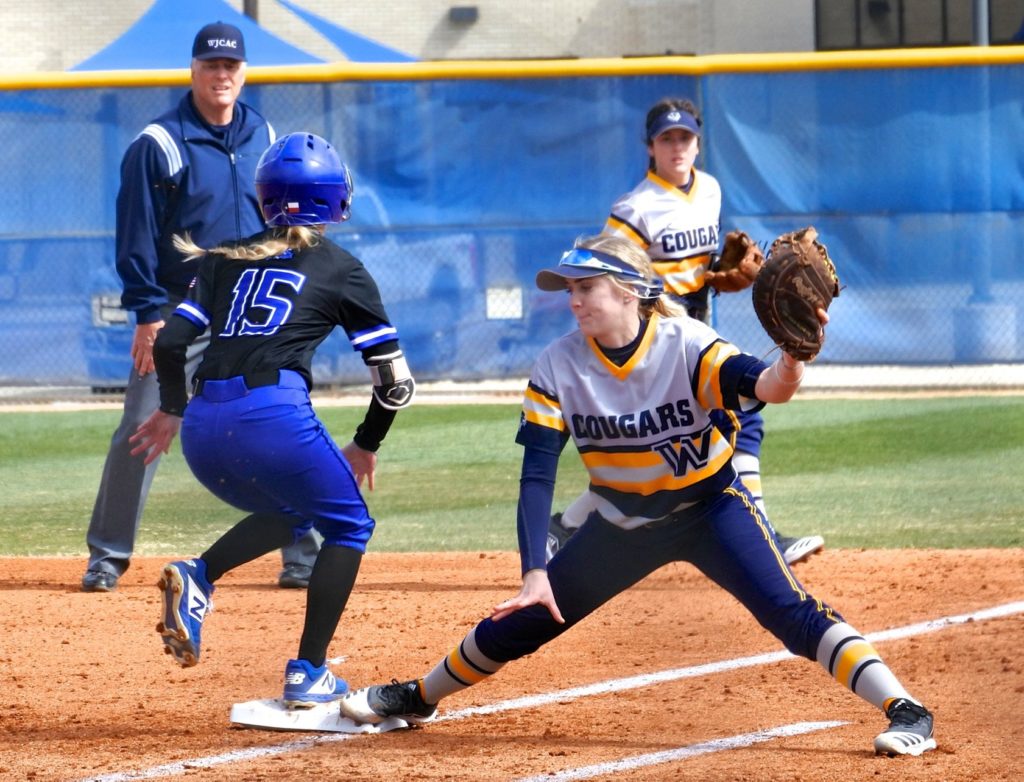 The opening game saw WNCC score first and then give up a few runs in the middle innings in falling to the Westerners 6-1.

WNCC head coach Katelyn Groves said the Texas trip was a learning experience for the rest of the year.

“Right now we are learning and we have a lot of moments to learn from good and bad,” Groves said. “WTC came out ready to play and we failed to make adjustments at the plate and didn’t make a couple plays that cost us. Game two we turned it on for the first couple of innings. Attitudes and energy were better and things started to go our way. We turned two timely double plays and got ourselves out of jams. Our outfielders did a great job cutting balls off in the gap and getting balls in quick, minimizing extra base hits.”

The second game was a team win as the Cougars finished with 10 hits and scored early and minimized runs by Western Texas.

Clark led off the game with a triple and scored on a Bakel single. Bakel came around to score on an error for a 2-0 lead.

WNCC added another run in the second. Hogan singled and scored on a Clark double for the 3-0 lead.

Western Texas added a run in the fifth, but the Cougars responded with a single run in the seventh. Hogan led off with a single. Pinch runner Lindsey Allie came around to score after stealing second on a Bakel single.

Defense was huge for the Cougars in limiting Western Texas to just a run. The fifth inning went from a possible big inning to a single run because of a bases-loaded double play that turned out to be huge.

The Cougars also turned a double play in the second inning after a lead-off single.

Hogan led the offensive attack with three hits, all singles, while scoring a run

Clark and Bakel each had two hits. Clark had a double and triple while scoring a run and driving in a run. Bakel drove in two and scored a run.

Cortney Rhees and Jade Gomez each had singles in the win.

Glawson pitched well in the contest, scattering six hits while giving up just one run. Glawson struck out five and had just 105 pitches in seven innings of work.

The first game saw WNCC score first with a run in the opening inning. Sam Davis ripped a 2-out single to score Bakel for the 1-0 lead.

Western Texas tied the game with a run in the first and took the lead with a single run in the third. The Westerners added four more runs to earn the 6-1 win.

Western Texas outhit WNCC 8-5. Bakel led the way with two hits including a double and run scored. Clark, Sam Davis and Cortney Rhees each had a single in the game.

“Thankfully, it’s February and we have time to learn and grow together from each of our losses and our wins,” Groves said. “We haven’t played our best softball yet and I’m excited to make some changes and work out some kinks. We will take a day or two off and get back to work as a team.”