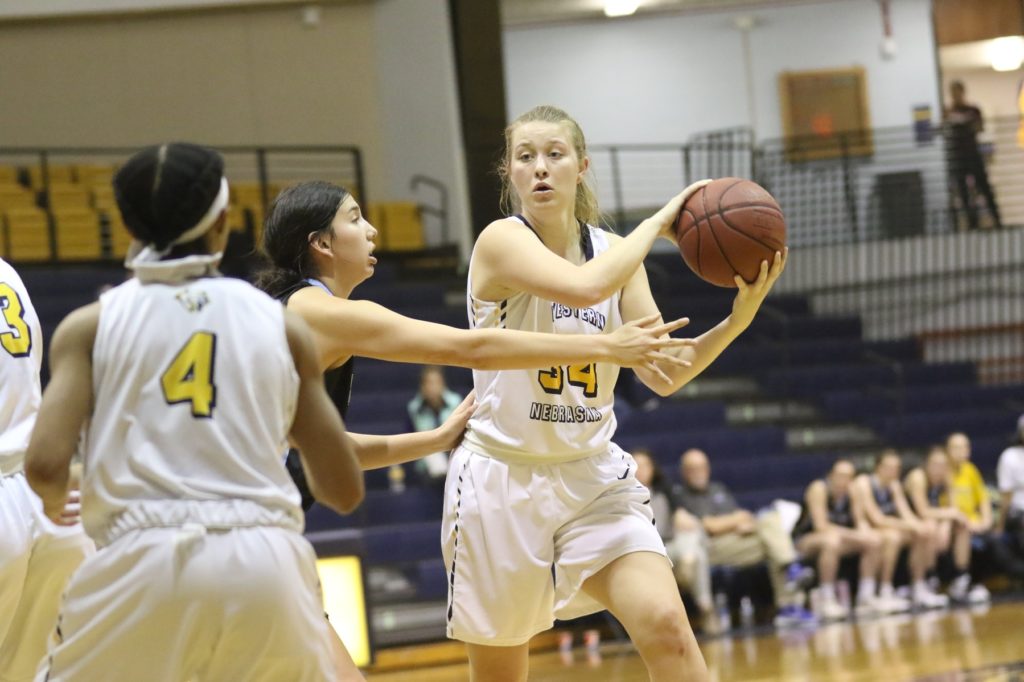 The WNCC women enter Tuesday’s sub-region contest on a roll, having won its last 14 games and are now ranked No. 7 in the NJCAA polls that were released on Monday.

Tipoff for the women’s Region IX South sub-region contest is slated for 5:30 p.m. followed by the men’s contest at 7:30 p.m.

WNCC head coach Chad Gibney said it will be a battle between two teams that have a combined 26 wins.

“It is going to be a very competitive game,” Gibney said. “McCook had a very nice first semester and they compete very hard on both ends of the court. They will certainly provide us with some challenges tomorrow night.”

WNCC enters with a target on its back after moving up to seventh in the nation in the recent polls. Gibney said it is nice that the program and girls are getting the recognition on the national level.

“I think it is awesome that we are getting recognition not only regionally, but nationally,” he said. “It shows how the program is viewed as well as the nice job we have done up to this point. We want to continue to take it one game at a time and win the game in front of us.”

The WNCC women enter with a 16-1 record after topping Northeastern Junior College 85-77 on Friday in the team’s south sub-region opener. McCook enters with a 10-3 record, having lost its last two contests. McCook started the season 10-1 before falling in their last two games before break to Laramie County Community College and Eastern Wyoming College. This will be McCook’s first game in 37 days.

“We have to find a way to control the pace of the game,” Gibney said. “It is going to be very important that we control the glass and limit them to one shot. We have to defend with urgency on each possession.

McCook will also have plenty of incentive as well. On the team is former Gering graduate Kelly Snelling, who will be returning to her hometown as a member of the McCook women’s team to play. Snelling said she is looking forward to be back in her hometown to play basketball for her friends and family to watch.

“I am super excited to come back and play in my hometown and in front all my friends and family,” Snelling said. “It will be just like I never left almost.”

Snelling expects it to be a good contest.

“I think the game will be a big battle,” she said. “This is our first game back from break so we are going to be hungry. The game will have good players making big plays so I think it will be a pretty good game, it will just come down to who wants to win more.”

Snelling said her team needs to play a complete game to upend a talented WNCC team that has lost since an early season loss to Hutchinson Community College.

“We just have to execute our plays and play good defense,” she said. “Any team can be beaten on any given night, like the NCAA men’s basketball this year where already three number 1s have went down. It can go either way and I’m super excited to see how we will execute against a ranked team.”

Both teams have players that can score and play defense. WNCC is averaging 80.6 points a contest while holding their opponents to 59.9 points. McCook has similar point production, averaging 79.1 points and allowing 60.4 points.

WNCC has five players averaging in double figures or near double figures, led by Tishara Morehouse at 21.5 points a game. Yuliyana Valcheva is next at 11.5 points followed by Lidsey Mahoukou at 10.9 and R’Manie Pulling and Taylor Joplin are averaging nine points a pop.

The McCook women are led by Makenna Bodette who is averaging 15.3 points and pulling down 9.4 rebounds. Also averaging in double figures for the Indians are Gail Whiting at 11.8 points and 5.8 rebounds, sophomore transfer from Miles Community College Paula Rosello Mateu at 11.5 points and 3.3 assists, Carla Torrubia Chano at 11 points and 5.9 rebounds, and Amiya Dartest at 10.8 and 2.9 assists.

Snelling said her team is playing well and the team is gelling together since coming back from break.

“I think we are playing really well,” she said. “We have had some illness but everyone has been back this week and we look saucy in practice.”

After the women’s contest, the men will hook horns. WNCC is 10-6 on the season and 0-1 in the South sub-region after falling to Northeastern Junior College on Friday 105-102. McCook enters the contest at 7-7 and it will be their first South sub-region contest.

McCook was last in action December 7 when they topped Eastern Wyoming College 76-73.

Audio of the games will be on KOZY 101.3 FM as well as online. Video will be available on the WNCC athletics Youtube channel as well as KNEB.TV.